Too late. Disassemble is in process. In case you’ve ever wondered what a laptop looks like when taken apart…it’s something like this: 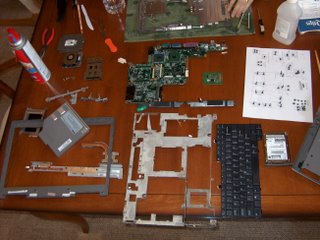 Remember last month, when I poured Merlot into my laptop? It turned out that there was no real damage to the hardware – just a coating of Merlot that caused…stickiness. Dell wouldn’t fix that. They said we should take it to a local computer shop and have them clean it.

There are two small problems with that: One, our local computer place is, uh…well. Let’s just say that I’ve seen their work around local businesses, and I will buy a new laptop before I let them touch one of mine. It will be cheaper and less frustrating.

And two…well. My husband spent many, many long years back in the day as a help desk geek technician, and a darned good one – let’s see, who do I trust more, some guy who was laid off six years ago and never quite managed to get another job, or my husband?

So this morning he was brutally and repeatedly nagged remembered that he had meant to do this and took things apart.

One of the reasons I trust my husband more than the average computer guy? Check out the way he handles the zillions of screws involved in a laptop: 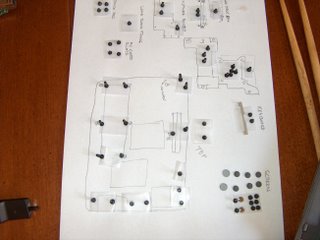 Uh-huh. They are taped to a schematic he drew. That’s the level of good he is. Me, I would have used a ramekin and then been surprised when I had five screws left over. Or spent a lot of hours cussing because I needed a longer screw but had no more of them so obviously I had used a long screw where a short screw would have done…but where? Where?! WHERE?!?!

He’s been working on this for over three hours now. The concentration! The muttering! The intense expression! The Mad Scientist hair!! 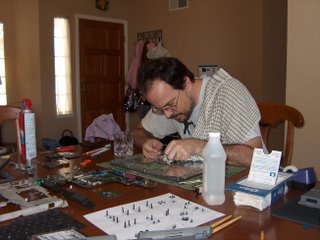 Yessir. This is how every red-blooded American male would like to spend his cherished Sunday. Fixing the laptop his mate poured red wine into while trying to hand him the phone because she didn’t want to talk to his old high school buddy for fear that, in a Merlot-induced spurt of honesty, she would say something like, “Oh for heaven’s sake, will you grow the @*^@ up and deal with your own problems for two minutes?!”. The laptop that she was told to take to a local computer repair shop, but instead was placed repeatedly on ‘his’ desk with comments such as, “But you’re so good at that kind of thing!” and “I just don’t trust Bill’s Bait Shop and Laptop Cleaning Service!” and “If you really loved me…!” (this is the lowest of all female bargaining methods, and I am deeply gratified that it occasionally works ashamed for using it).

I am sure that in the vows it was said that he would 'fix' everything... LOL
M

A helpin' heapin' of gratitude to your husband for that schematic scheme and to you for passing it on. My screw organization has always been solid, but not only is his so much better, it gives me something to pass along to my tinkering son in hopes that I will never again hear, "Hey, Dad. Can you help me figure where these last two screws go?"