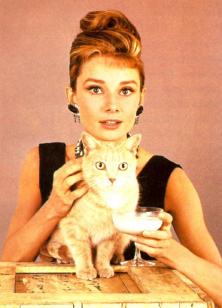 Alas, in real life? Eh…not so much: 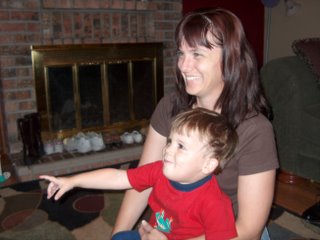 In my defense, a scrunchy was pulled out of my hair shortly before this was snapped (hence that weird wavy-frizzy look), because the ponytail does not meet with My Lord and Master’s approval. Also, I really do take rotten pictures. There are almost no ‘good’ pictures of me. I like to believe my friends and family when they say I am much prettier than this “in person”.

That they say this at gunpoint does not make it any less true, right?

I’ve decided that my problem is I have no sustained vanity when it comes to Appearances. I have, rather, vanity bursts. Spurts of vanity. Moments when I say, “Dammit, I’m better than that! No really! I could be one fine babe!!! If I just applied myself a little…”

And I decide that I’m going to throw out all those awful slouchy t-shirts and stained up jeans and replace them with stuff from Coldwater Creek and Talbots, go to the gym to get rid of all the floppage, and get a cute little haircut and furthermore! Every Single Morning Without Fail I am going to go through the facial unguent routine and put on makeup AND ‘do’ my hair!

But apparently I have goldfish DNA in my memory cells, because five minutes later? The un-done-up hair is back in the ponytail and my un-made-up face is appearing above a t-shirt with grease marks I tell myself aren’t all that bad and besides! I’m just going about my day in the house, not going anywhere, and who gives a @*^&@, anyway?

Nobody is going to be asking for my autograph or saying, “Wow! Isn’t that the World Famous Tama ™? Oh my goodness, I never realized how…blotchy…she is, in real life…is that toddler drool in her hair?”

Yet occasionally, I will have these fits at an inopportune time. Say, while at a department store. I might catch a passing glimpse of myself in a mirror (invariably scowling unattractively because I’m thinking, “$38 for a blouse, are they CRAZY?!?!”), suffer a fit of vanity, and be within a five minute sprint of the Estee Lauder counter.

$200 later, I’m lugging home a little bag of bottles promising to reduce 57 signs of aging, erase lines, fade spots, lift sagging bits and in general make me look less hag-like. Which they don’t, possibly because I use them about three times, leave them on my counter until there is a coating of dust approximately six inches high on their lids, and then relegate them to the junk-tumble under the bathroom sink until they are discovered years later during an archeological dig in search of toilet paper.

Having just thrown away about six hundred such bottles, I am drafting a letter to my Congressman. It is my firm opinion that all unauthorized mirrors should be removed from department stores forthwith. Mirrors should be only in areas where a person would really, really want them: dressing rooms (although they should have a switch on them, so I can turn them off while I’m changing and back on again once I’ve covered my cottage-cheese thighs and belly-floppage), and at the cosmetics counter.

So much waste could be avoided by simply removing extra mirrors from department stores. And if he can’t see my logic, perhaps being pegged upside the head with a few almost full bottles of 1992 Wrinkle-B-Gone (1992 was such a good year for wrinkle remover creams!) will help him get the point…

When I look at that Audrey Hepburn picture, what strikes me most about it are her arms. The rest of it can be attained with the right stylists - hair can be colored, jewelry can be bought/borrowed, you could find the perfect little black dress, you could have your makeup professionally done. But those ARMS! They're perfectly toned! No scars or flab, just gorgeous dewy skin over healthy lean muscle. That's work, my friend. Serious devoted work. But it's also her job to look that way. And I daresay with your work ethic, Tama, if that was your job you'd look exactly the same!

Oh how we torture ourselves. I keep flying down to the OC where perfection is the status quo - but not for me. I'm just a slouchy brunette from the Bay Area. Oh well.

I haven't seen you since my sister's wedding which was, what? five or six years ago?, and you look like you haven't aged a day!

I think you look gorgeous. Are you really older than i am? Because i don't believe it.


Love,
snippee (behind on your blog again)