YOU KNOW THOSE DAYS…when you’re sitting there…in a meeting…and someone says “we want you to do this absolutely ridiculous thing that is totally unnecessary and will have such a high cost in resources that we might as well just give up and go back to carving hieroglyphs onto rocks because it probably would be faster”…and you look at them and go: 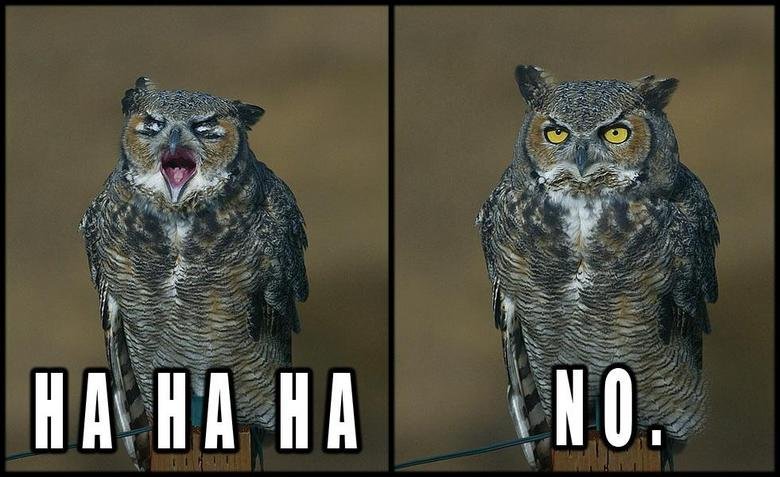 …and then you go, “blah blah blah resources etc. etc. performance yadda yadda seriously, man, that’d be, like, ‘can’t even USE the thing anymore’ levels of bad…

And then they go, welllll i mean i doan wanna tell u wat u biz-niz iz, dawg, BUT…!

…and proceed to tell you that they “tested” this hypothesis by comparing something totally different from what you’re talking about (includes Ridiculous Thing, but not most of the whackity-gazillion OTHER things the newer system does) vs. what you are talking about sorta-kinda…in an environment with two users / almost-zero data, aaaaaaaaand…they can prove that there is exactly no performance impact from doing the twelve-pass crazy-cake of repeated-calling-to-the-server-over-and-over-again that they totally NEED to do.

…and you’re all like this because up close you it really looks like The Stupids here are EPIC in size, which clearly can’t be true because you know that these are not stupid people…

…and the rest of your team are all like this… …because they know you’re about to tilt another windmill?

{…puts pot on head, picks up ruler and charges into battle…}

In related news, I feel I deserve a damned medal for not losing my temper OR my patience, and for not laying a verbal smack down on the offender that would have had his ancestors back to seven or eight generations nursing a headache.

…BUT STILL, IT WOULD HAVE MOMENTARILY FELT AWESOME.

But, no. I resisted. I minded my manners. I remained cheerful and helpful and go team! as I went about shutting THAT noise down.

Because I…am an adult. Also because I was successfully Adulting this week, every single day this week, I went straight from work-work into house-work, even though I could totally have played some Warcraft or something instead and nobody would have been around to call me on it.

My kitchen actually looks…not scary. The bathrooms aren’t completely disgusting. There is less dust on things. The carpets got vacuumed. Dinners were made and served before, like, 9:30 at night.

I am so awesome I don’t even know how to describe it right now.

{puts eight gold stars on Adulting chart from Creatively Katherine, who apparently actually does all kinds of creative home-making things that I think about doing, but then never actually do because it requires things like ‘creativity’ and ‘effort’ – and also because my decorating theme these last few years has apparently been “unkempt barn populated entirely by feral animals”}

AND THEN, I went to the husband’s company party and did Social Things, and I even stayed in the room and did social-stuff instead of sneaking out to hide somewhere like I usually do.

Which reminds me, this is the outfit I put together for the husband’s company party last night…because I hate shopping for dresses but can spend any amount of time oogling “cool” and “interesting” fashion choices. All of it came from Amazon except that little leather pouch, which I got about ten thousand years ago from the Oberon Design booth at Ren Faire. The husband already had the tophat and coat from his Dickens Fair days, so we got him a pair of goggles to put on the hat, a white vest and cravat, and a new pants and shoes. I think he looked rather dashing.

Yeah. We’re a pair of dorks. But we have an awful lot of fun with it. Also, I suck at doing “solemn” pictures. I just can’t seem to not get the giggles, every time I try. Sigh.

ANYWAY…I figure at this point I have done all the Adulting necessary to completely fill up three of those charts, and therefore I get three rewards, all of which involve loafing, goofing off and otherwise not Adulting.

(The outfit is actually very simple and not terribly expensive to put together: One steampunk-ish bodice, a ruffly-shirt, one long black skirt and one long white one, a tie-on “bustle” thing [“…does this make my butt look big…?”], a clip-on hat, and a pair of  “Victorian-ish” boots…the total cost was around $160, which wasn’t too bad for “semi-formal” eventwear. It certainly isn’t “authentic” steampunk, but this wasn’t an “authentic” steampunk event, so, whatever) (I also had a big black lace shawl I knit a few years ago from a delicious wool yarn a very sweet coworker bought for me as a going away present when my contract with the company was up…but I’d shed it by the time we were taking these pictures because it got warm in there.)

I don't wanna shop no more

The only thing I hate more than clothes shopping in general is shopping for dresses.

Like, say, something to wear to a black-and-white “affair.”

…if somebody could just, like, stab me right now, that’d be awesome. I mean, don’t kill me or anything, that’d be bad, but, you know, just wound me badly enough that I can honestly say, “Aww, gosh, I’m so sorry that I couldn’t attend le soiree, but I am just completely laid up right now…”

I’m pretty sure it would be less painful than trying to shop for a new dress.

FIRST OF ALL…when exactly did “sleeves” become taboo? Seriously. It is January, people. I am not going to go prancing around in a sleeveless little confection with my goose-pimples playing peekaboo with $DEITY and everybody.

I am one of those people who starts whining that it feels awfully cold in here when the temperature drops below about 70 degrees, and escalates the whining to a continual, high-pitched drone if it goes any lower than that.

YES, I AM A SPOILED-ROTTEN CALIFORNIA BABY. I AM CURRENTLY WEARING TWO SHIRTS AND A SWEATER AND A VEST AND IT IS A ‘TOASTY’ 65 DEGREES AND EVERYBODY WHO LIVES ANYWHERE THAT HAS ACTUAL WINTER IS LAUGHING HYSTERICALLY AT ME AND I DON’T CARE.

If I weren’t also cheap, I would so have cranked up the heater by now.

Sleeveless sheathes of floaty-chiffon = OUT.

SECONDLY, do you know what I do not need? A slit in my dress extending all the way up to my darned crotch.

Nor do I feel any particular need to wear a dress whose entire corset area is see-through. I mean, really now. Nobody wants to be resting their eyeballs on my ever-so-alluring grandma-bras, people. NOBODY.

Look. It’s very simple: I just want something black and/or white that is pretty but not too short, too revealing, too old-lady-ish, flattering to a body that hasn’t completely given up all hope of being female, buuuuuuut also admittedly has a bit of (ahem) mileage on it.

And isn’t, you know, boring.

Or since it’s a kinda formal-ish thing, maybe this one. It’s interesting, right?

Hmm, maybe this is a little…much…

No, wait-wait-wait, this is much better…the collar makes this thing…

…no, I have NOT gotten sidetracked, I assure you I am LASER-FOCUSED right now…


…somehow, stabbing myself to get out of going at all to this thing is starting to sound more and more rational…