Meanwhile, on Lifestyle of the Poor and Stupid

Y’ALL…I am having one helluva run lately.

EXHIBIT A, from last month (and the only one I have pictorial evidence of):

Now, what I would love to be able to report is that, say, I came out from doing the grocery shopping and just found the side of my van smashed in like that.

Or that somebody rammed into us at a stop sign, because they were doing something really stupid like trying to text a selfie to themselves or some-such.

Or even that I just came out one morning and found that Homer had gotten into a dispute with another minivan over females (there is a rather sexy Corvette across the street that I suspect may be going into heat).

But this is not what happened.

What happened was…I hit a tree.

…I just…can’t even…I have been driving for a bit over thirty years. I have by my rough estimation driven almost a million miles without a single “at-fault” accident to my record; six vehicles that were each over 200K miles before they went to the great Car Hereafter, adjusted down a bit in deference to the fact that most of them were also driven by the husband for at least some of those miles.

AND, I have been driving ‘extra long’ vehicles like full-sized or minivans for over twenty of those years. It’s not like I am not keenly aware of how much more vehicle there is after the driver’s seat has passed something. Or new to the peculiar geometry involved in piloting same, where the rear of your vehicle has a nasty habit of turning not exactly independently of the front end, but definitely on a different trajectory than you might expect.

But, I misjudged my clearance of that stupid tree. It’s planted right at the edge of a rather narrow driveway (like, “parking lot => sidewalk => let’s plant the tree HERE, literally IN the CURB!”), where you have to make a very sharp right turn to get onto the street. And I thought I was clear of it, but, well, I wasn’t.

For bonus points, at the time? I thought I’d bumped the tree. You know, lightly. I winced and thought, Ugh…more scratches…well, hopefully they’ll buff out, but, you know, eh, they’ll be in good company, poor old Homer has TONS of dings and scratches already…

Then I got home, walked around and looked at it, my chin hit the driveway and I may have uttered a few choice words that peeled the paint even more. And then I was all, “I can’t call the insurance company. I just can’t. There is no way I can say the words ‘I hit a tree’ and live…the embarrassment will kill me…”

But eventually I did  and about a week later…

…it never even happened…

Right around the same time, work was a massive fireball of insanity. We had two releases back to back, we just started using this “automated” deploy tool that involves branching and merging and more merging and nobody really knows how to use the thing because training? naaaaaaaah, it’s INTUITIVE, and the Mandate™ is START USING THIS, IMMEDIATELY!, sooooooo, we did and inevitably, somebody really screwed it up.

We’re still finding little…Easter eggs…all up and down the stack. Most of them minor irritations, but a few of them really, REALLY bad.

Like, deleted almost ALL of the profitability records, and mangled the ones it didn’t delete levels of bad.

Meanwhile in other news, our Sharepoint site – the entire site, calendars, wiki pages, documentation, ALL of it – vanished. Because another group decided to move it.

Well, parts of it.

Secretly, they were hoping nobody would notice and they would be able to allow everything they didn’t move to delete itself after seven days.

But old Killjoy over here noticed by 5:35 a.m. the very first day after they pulled this stunt, OH YES I DID.

…geez, woman, people in China can hear you, calm down…

MEANWHILE, the Happy Hooligans were busy smashing the current branch of our handy-dandy, super-intuitive, this will make it so that NOTHING will EVER go wrong again during a deploy software.

Which then took about four days to untangle.

In the meantime, both my desktop and my laptop pitched massive hissy-fits and demanded maintenance. NOW.

{most of a precious weekend day spent running diagnostics / removing ancient software / reviewing the whackity-gazillion things that had inserted themselves into “on startup” loading} (on the plus side, both machines now boot in a fraction the time they used to take, and neither has given us a blue screen since)

Then we had an exhausting two-for-one event last weekend, with a BCP (<= “business continuity plan”, a.k.a., “let’s pretend that our production servers all simultaneously exploded and we had to switch over to the backup servers in the farm that is about 850 miles away from them!”) exercise and a huge patching event that rolled through darn near every server in Wholesale, and I was online an “extra” twenty hours between Friday night and Sunday afternoon.

Which was why my boss collared me Monday morning as I was pulling my favorite pot on my head so I could go joust some more windmills and said, “Hold it! You. Pick a day this week, and take most of it off.”

So after consulting the calendar, I picked today. I logged off by 9:30 in the morning, got my nails done and my bangs trimmed, and even got myself a treat at McDonalds on the way home.

It’s a beautiful, sunny day out here today, the birds are singing, the puddles from last week’s storms are all dried up, it’s not too hot and not too cold and I was thinking to myself, “Sweet! I still have, like, four hours before I have to pick up the Denizens! I can start working on the backyard, turn the water on and find all the busted manifolds, start rebuilding the beds we tore apart for the construction last year…it’ll be fantastic to get outside!”

…oh, but first, I’m going to clean this kitchen, ye gods, what a DISGUSTING mess..!

Scraped the first plate, flipped on the disposal, aaaaaaaaaaaand…[BLURRRRRRRRRGGGGGGLEEEEEEEEE!]

Water came welling up in the other sink. Nasty, blackened water with all manner of ick in it. Way more water than seemed even possible. Like, not just the water that I had put into the other sink, but like there was some kind of “let’s divert the creek water into that sink over there!” amounts of water.

I let out a screech that could be heard from space. Turned off the water and stood there watching in horrified fascination as the water continued to rise in the other sink. Breathed a sigh of relief as it started to ever so slowly stop rising and start draining again.

…and then I heard the unmistakable sound of a waterfall coming from under the sink. Threw it open and sure enough, the water wasn’t draining out the pipes, it was just happily creating a new lake for all its muck to splash around in under the sink.

You know those moments when you just kind of stand there for a second, mesmerized by something that is unfolding in front of you even as another part of your brain is screaming, “QUICK, YOU IDIOT! GET SOMETHING UNDER THAT! DON’T JUST STAND THERE WATCHING IT! MOVE-MOVE-MOVE!!”?

…but you can’t, all you can do is just stand there, like this? 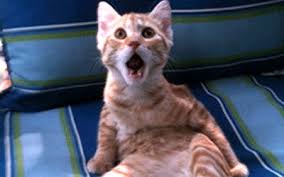 Totally one of those moments.

About an hour later, there was a poor, underpaid-no-matter-how-much-he-makes guy currently rooting around under my nasty swamp-imbued kitchen sink forcing cables and jets of water and large machinery that goes “RRRRRUM-RUTTA-RUTTA-RUTTA-THUMP-THUMP!!” through the pipes that exit through the back of the sink.

Well, I was going to go work outside in the garden today…and I actually still could get an hour or two out there if I really wanted to…but frankly, I kind of don’t.

The deploy I’m not technically attending starts in an hour, the Denizens are popping in and out of my office like sideways jack-in-the-boxes, and I feel way more frazzled and on-edge than seems reasonable right this minute.

Like I expect to look over my shoulder and see an actual, living tiger staring at me meaningfully.

Who is now meowing loudly because I glanced her direction, which hopefully means that I’m going to drop everything and feed her. Like, right-now.

…you had ONE JOB…

For some reason, I have been really bothered by something lately. Not like, you know, my whole life’s focus has narrowed down to this ONE THING kind of really bothered, but still…bothered.

And it’s this: Somewhere out there, right this minute, someone is being paid actual money to come up with a subject line for an email campaign.

And that person, after due consideration, is going to come up with something along the lines of, “HURRY!!! ONLY FOUR MORE DAYS TO SAVE!!!!!!”

…really…? That was your best shot?

Maybe it’s just me, BUT…well. Put it this way: I have a handful of half-arsed rules set up in Outlook to catch “obviously spam advertisements” that my gray mail tool can’t seem to identify.

The out-of-the-box gray mail scanner gets maybe 10% of the junk.

My handful of rules get about 85% of it.

Which is another whole rant, ESPECIALLY if we factor in how often the ‘professionally designed by actual email-coding-people’ scanner MISSES the spam but decides one of my ACTUAL HUMAN FRIENDS is CLEARLY a dangerous entity who needs to be BLOCKED…but let’s stay on topic for now.

Every time I take the fast-scan through the junk folder my rules automatically move those things to, I get perversely irritated about not the fact that they exist in the first place…or the fact that I feel obligated to at least glance at them in case I accidentally shunted aside an actual email from an actual person…no.

It’s that the thought inevitably occurs to me: Somebody was paid to come up with a subject line for that spam, and proceeded to come up with one that was so cookie-cutter that my half-arsed Outlook rules could identify it immediately as being, well, spam.

You had ONE JOB, man: Come up with a subject line that would catch my attention and make me go, “Huh, that might actually be worth opening…”

…and you came up with “HURRY!!! ONLY FOUR DAYS LEFT TO SAVE!!!!!” (<= two string-based rules broken, “starts with ‘hurry’”and “more than two exclamation points in a row”, tsk-tsk-tsk…)

Now granted, it wouldn’t be easy to come up with an endless supply of clever, interesting subject lines for such campaigns. There’s only so many ways to say “we are having a sale on stuff! you should totally check it out!”

And also there’s the fact that I often fail to remember that not everybody in America shares my interest in language.

I mean, I use words like ‘obfuscatate’ in work emails. <= exactly like that, with a hyperlink to the definition so nobody has to ’fess up if they have no clue what it means.

BUT, the one thing I do know is that everybody else is just like me: If you’ve ever bought even one thing online? => you’ve got a zillion-and-five spam emails coming a week.

C’mon guys. Hire some people who know how to make words sing. Give some aspiring novelists a day job. Give ME a break.

And who knows? Maybe you might even get one or two more of the elebenty-gazillion people whose inboxes are bloating up with these things to actually open it, if only in the hopes that the ad-text won’t be the usual blend of ‘exciting’ ‘fashionable’ ‘best prices of the year’ every other ad has been for the last forever plus fifteen years…