Soooooooo…in a couple hours here, we’re celebrating Captain Adventure’s 11th birthday, omg no way how is it POSSIBLE that my BABY is ELEVEN! YEARS! OLD?!

Predictably, he has exactly one (1) thing on his wish list: Video games.

Sigh – yeah, he’s my kid all right. The two of us are hopeless gamers. Honestly, I suspect the only reason I haven’t long ago quit my job and quit mom-ing and quit just about everything else in favor of sitting on my arse surrounded by a mountain of empty Diet Pepsi containers and pizza boxes in a darkened room playing video games is because my actual job feels exactly the same to me as video games do: Digital logic puzzles, all day long, what’s not to love?!

NATURALLY, Captain Adventure not only having made the fact that he only wants video games for his birthday very, very, very, very, VERY clear…means I have to mess with him a little.

I set the scene a couple days ago when he was yet again making absolutely sure that his dumb-arsed mother was completely aware of his birthday-present-related video game desires.

“Wellllll, but, I’m pretty sure Grandma and Grandpa are getting you a video game,” I said in my best ‘Mom Being Reasonable, a.k.a., BORING!’ voice. “Don’t you want something else, too? Like, some clothes?”

“…but you know, kiddo, sure it’s really hot right now [really hot, we have had the worst summer for dry, unrelenting heat that I can remember in a long, LONG time], but, it’s going to get cold soon. AND you’re going back to school in a couple weeks. Don’t you also need some long sleeves shirts? That actually fit and don’t have holes in them?!”

(All of his shirts end up with holes in them, because he insists on gouging pencils through them. ARGH!) (Says the woman who owns exactly zero pens that do not have teeth marks in them because her brain-is-in-idle-mode habit is putting a pen into her mouth and gnawing on it, I have no idea why…I never mean to, I just sort of become aware that I’m doing it…siiiiiiiigh…)

He looked at me with that expression that clearly says, How is this idiot able to even FUNCTION, with NO BRAINS?! And, no, he did not think a shirt was even a slightly OK birthday present. Geez, mom…

“…oh! I know! you know what else you need? Socks, dude. Socks. Your socks are all too small, and most of them are getting mighty threadbare, too…”

If looks could kill, I would be ghost writing right now. NO, MOM. NO SOCKS EITHER.

Heh. Little man, I HAVE YOU NOW…

Now, with my Captain, I can’t do things like I did to Boo Bug a few years ago, where I hid her actual present in the other room and made her suffer for a couple minutes (we still laugh about that) (those stupid knock-off Little Pony things went on to have a very happy life with a very excited four year old who still loves them madly even though she is now a sophisticated seven year old).

While he’s got an excellent sense of humor, and “gets” teasing pretty well – he’s also got a shorter fuse, and could actually get really upset if he thought for more than a few seconds that we had actually only gotten him, you know, clothes.

…one long-sleeved shirt wrapped around his actual presents…

…a few pairs of socks for added troll-factor…

Soooooo, there's some potty-mouth in this, but OMG, YES, this is totally me whenever I get one of those beepity-beep-honk-honk captcha things...

It all started with a lemon…

I was sitting at my desk late one afternoon avoiding chores watching the squirrels a couple weeks ago, and they had once again gotten themselves a lemon off the lemon tree.

But unlike the last time I watched them, they were actually eating it.

They clearly did not like it, but nevertheless, they screwed up their little squirrely faces and took nibble after resolute nibble.

My first thought was, Dammit, they’re going to DECIMATE that tree this year.

Then I thought, …wait…why are they torturing themselves like that…?

And then the obvious reared up and smacked me in the back of the head. My yard looks exactly like all the yards right now; and like most of the fields around here, too.

Dry, cracked ground. No sprinklers running, ever. Water being rationed out manually on an irregular basis as sparingly as possible, with extra care given to ensuring it doesn’t pool up or overflow. Areas that would normally be lush with growing vegetables just empty beds, waiting for the drought to loosen its chokehold on us.

Shoot, half of the trees around here are dead – the water table has dropped so low that they just can’t cope. Wells are running dry all over the area, smaller farms are shutting down for the duration, the sloughs are dropping so low that they’re being closed to anything bigger than an inflatable raft…

…they don’t want to eat the lemons, they’re desperate for the juice inside them.

Yes, I felt sorry for them, but mostly I found myself contemplating what was going to happen to the handful of things I am still trying to grow; devil a tomato was I going to get, if those squirrels were really hungry or thirsty. I could forget about my moccasin beans, too. And they’d probably eat every last one of those lemons.

And hate every last nibble of it.

There are two basic ways to go about dealing with tree squirrels when they decide to move into your yard: You can go to war, or you can try to figure out a way to live together.

Considering that they have been amusing the heck out of me with their antics on and around the lumber and masonry piles, and given that I’m not particularly interested in entering into a prolonged period of having traps or poisons out in an attempt to eradicate them (which is seldom more than a momentary victory anyway, another tribe is going to move in right behind the one you just got rid of) – I decided to go with the “negotiate” method.

I’ve put out a small water thing like this one in the shade right next to the nesting den – they can get a drink without having to expose themselves to the hunting hawks and crows. 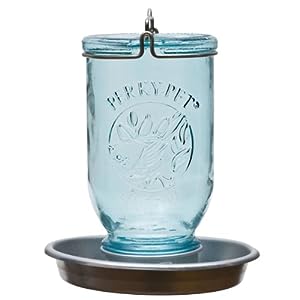 I’ve also started leaving them little (very little, I don’t want to be either their sole source of food or start having so much food out that all the varmints from everywhere want to move in) caches of Critter Food (designed for squirrels and their cousins – I don’t want to end up making them sick!) in and around the storage areas – well away from my garden beds, but where I can still watch them going through their acrobatics to get at them. And also where they have a lot of places to hide if…well, when, there really isn’t much if there…a crow or hawk decides to have a go at them.

I figured if I could give them easier access to stuff they actually liked more they might be willing to be content with it – so far, it seems to be working. I started doing this last weekend, and guess what? Not even one more lemon has been endured by the Squirrel Clan. They’ve also stopped digging around in my potato containers, stealing unripe tomatoes, and putting tooth marks into my bean pods.

For bonus points, Momma Squirrel has become even more territorial than she always was (which was pretty darned territorial – after all, this is her nest and her kits we’re talking about here); this afternoon, a rather large interloper dared to poke his nose into the yard, and she ran him off almost before he’d even gotten a paw fully onto this side of the fence. You go, momma!

Well, we’ll see how it goes.

On the bright side, I have to say: I’m really enjoying having them around. A lot more than makes sense, really…I’m not even all that mad about the lost tomatoes, come right down to it. Watching the squirrel-babies growing up is better than a thousand Netflix videos, and somehow every time I catch a flicker of movement out of the corner of my eye and glance up just in time to see one of them make an insane leap from one shelf of masonry to another – a leap three or four times their entire body length and with a nasty plummet ahead if they missed – it just kind of makes me smile, you know?

You’re insane, little squirrels. You’ve got more guts than sense, you go for what you want, you’re amazingly graceful even when you’re taking a face-plant because you misjudged how stable that stick you were jumping from was, you are totally OK with just flopping for a quick nap in the middle of a romp and basically you’re just so in the moment, all the time.

I respect and admire that, more than I like to admit.

…rock on, you little lunatics, rock on…