Working is so hard on the budget...


Boy, have the last two weeks been tough, budget-wise.

To be fair, I didn’t really make much of an effort to be frugal. Mostly I was just, uh, getting through the day.

But it has really got to stop. Because I’m not making all that much money, really. It seems like a lot on paper, but once I’ve factored in the childcare and the commute expenses, I actually barely even break even. Toss in a few ‘unauthorized’ meals out and I’ve wiped out the entire positive balance!

I used to be damned good at this ‘frugal working’ thing; but it’s been two years since I used that part of my memory-banks and man! This, I think, is a good pictorial representation of what my brain looks like at this point in time: 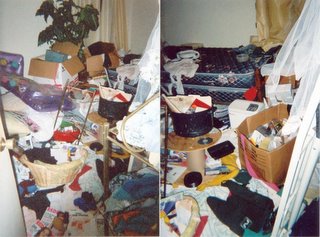 This picture, BTW, was shamelessly stolen from Work in Progress, which documents a lady’s journey from Squalor. Want more of this kind of stuff? Try Squalor Survivors, which is a kind of Internet support group for the hideously filthy and disorganized. I’ve never been quite that bad, but I like to go to the site both to find comfort (at least I’m not that bad, holy guacamole!) and the motivation to get off my lazy arse and get moving (…however, if I don’t get going here, I will indeed be that bad!).

As I remember things, I’ll throw them out. Starting with one of the easiest ways to save money when one is working, whether the hours are sane or not: Bring a bagged lunch.

Holy smoke! I went to those "I'm a total slob" sites and got a huge self-esteem boost. I have let my room 'go' before but not like that. No no - never like that. My desk looks like a bomb went off on it but still.. not like THAT

When you make your lunch don't forget to take it to work with you :-)