As the Closing Ceremony music swells...

…this is where I have ended these Olympic Games: 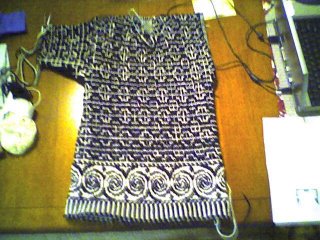 That would be…one half of one sleeve done. I’m one and a half sleeves, a neckline, and ‘finishing’ (the darning in of loose ends, the light steaming, shaping and five days worth of drying time part) short of a finished project.

So, obviously – I didn’t make it. I didn’t make it by a long shot. And it will probably take me a month to make as much progress as I made in sixteen days of concerted effort – I’m not going to try to take this on the trains with me to work on. It’s too big, too heavy, and waaaaaaaaay too awkward at this point to be trying to do while swaying and bumping and trying not to impale the person next to me, especially since I’m using all those double-pointed needles for the sleeves. I’m reverting to socks and baby outfits and such-like for my on-the-go projects. Starting with a shawl and hat combo out of a deep red alpaca to a) keep my ears warm and b) dress up a pretty solemn black wool coat of mine.

Like any athlete, I have gone back over my performance in excruciating detail, and have isolated several areas where I could have done better. Time I wasted by missing directions, rookie moves that had to be torn out and reknit, the fact that I turn into a pumpkin at 10:00 and, no matter how much I may want to stay up and knit (and watch ice skaters) longer, I just can’t. I’ve criticized everything from my yarn choice to my knitting technique to the pattern itself – it’s a long sweater. Very long. Like, middle-of-the-thigh long. **sigh** Longer than I had thought, which added an entire day’s worth of knitting I wasn’t expecting.

Oh well. I’m disappointed that I didn’t make it. I really hoped I could do it, and I just couldn’t.

I feel a lot like the kids who went to the Olympics. You know, the ones who were about, oh, eight years old (OK, so, probably more like 16-17), who got out there and were just full of energy and jumped all over the place and fell on their behinds and leapt up and kept going, and in the end the judges said things like, “Well, the inexperience really showed but it was a very nice effort and I’m sure a great learning experience for her, and she’ll be working on this for next time and I’m sure we’ll see Great Things from her in Vancouver…”

A lot of false starts, mistakes, tearing out, having to learn new techniques, doing them wrong, coming back at them, wasting time and yarn and everything else. Also, I have gone through more bandaids in the last couple days than I have in the month before that. At last count, I had one on my left thumb and forefinger, and one on my right index and middle finger. Wool burns. Gotta love ‘em.

But I learned a lot in undertaking this challenge. And oh, it was so worth doing. I’ve loved this pattern for over a decade, but have always thought it was ‘beyond’ me. Along with a few dozen other patterns by this and a few other designers – I love many of the Fair Isle-style sweaters, but…I’ve always shied away from them on the theory that they were ‘too hard’ or would take too long, or {insert excuse here}.

Yes, it’s been a challenge (hoo boy, has it been a challenge). The steeks were a helluva learning experience for me (now that I’ve done one, I’m laughing my arse off at myself every time I think about how I thought they were supposed to be done). The Fair Isle technique was likewise new, and after much cussing and hand-cramping I finally got the hang of holding both yarns in one hand and using a simple dip of my wrist to choose which one hooked around the needle. Sweet. And I used another new technique to graft the shoulders together (thank you, Nancie Wiseman) and I’ve got to say: it’s probably the sexiest shoulder seam I’ve ever done. It doesn’t look like a seam, and has no ‘lump’ under it – it looks like I knit the whole thing right up over the shoulder. Double sweet.

I was pouting over my unfinished sweater this afternoon when it suddenly hit me: I’m going to finish it.

It’s going to be beautiful. I haven’t ruined it with my rush. I’ve done it right.

I can so totally handle the Fair Isle sweater, steeks and all. I don’t have to fear a Fair Isle knitting pattern, ever again.

It’s worth every bandaid, every weird meal eaten over the sink in a deadly rush so I could get back to my knitting, even the unnatural obsession with how much yarn, precisely, was going into each of these rounds, because I’ve only got 10 balls of the black and if I use up more than one ball per 3.5” of knitting, I’m in trooooooouble…

I’ll post a picture of it when it’s done. I promise. It won’t be hard to remember. I think I’m going to be ridiculously proud of this bad boy when it’s all finished up…

You should be very proud, this is a serious accomplishment! The sweater is just beautiful, and I can't wait to see the finished product.

So, you have me inspired. Okay, you and the author for some mindless fiction. There's this author, Debbie Macomber, and she writes those nice easy-on-the-brain kind of books that I can handle right now between all the school and work crap.

Anyhow, I read one called The Shop On Blossom Street and the follow up called A Good Yarn. As the name implies, the books are about knitting. Specifically, about a yarn store and some people who really love to knit. These characters learned how to knit socks using some circle needle (???) and it sounded like fun.

I admire knitters a great deal. I tried to learn one time, and did okay. Basically I ended up with something too wide for a scarf and too narrow for a blanket, but it was made of yarn and put together with needles. And it was purple. I was proud.

The point to this...I think I would really enjoy knitting. I adore cross-stitching, but want to learn knitting. Specifically, I want to knit a sock.

So, after all that rambling, how would one go about learning how to knit a sock? I suppose I actually need to learn how to knit two socks. So, any ideas? Are there some good websites that might list classes or something?

YEAH!!! I can't wait to see the finished product!!! now if I can just learn to purl... maybe I can try some other stuff...

You are phenomenal! This sweater is going to be gorgeous and you have very much to be proud of. I can't wait to see the finished product.

Whatever a steek is, I'm sure proud of you for conquering one.

It's beautiful, Tama. Congratulations on all your hard work. It will look lovely on you (please post a photo of you wearing it when it's done).

Where you see "far from done" I see "almost a complete sweater." In 16 days. Wow.