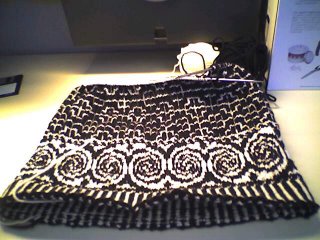 Those of you with either incredibly keen eyesight or a damned good optometrist will note that the progress made here is measured in centimeters. About ten of them, to be exact. Ten centimeters. That’s how far I’ve gotten in the last three days.

It would have been more like eighteen centimeters, but, funny story there. Ha ha. Yes. Very funny.

See, what happened was, I was so sure that I knew this pattern, and felt just ever-so-smug about my new and improved stranding techniques (which is cool, but I’ll boast about that sometime when I’m not busy kicking myself) and was sitting there almost at the end of the first leg of train ride this morning complimenting myself for the progress I had made when…suddenly…I realized…

I was off my pattern.

I wasn’t where I thought I was, and hadn’t been for two whole rounds. I now had this weird funky line where no funky line was supposed to be.

Let us draw the G-rating curtain over what I actually muttered and sanitize it down to “Gosh darn it all to heck!”

I tried to repair it by un-knitting the erroneous stitches only and drawing up the correct color from the stranding. No go – too tight, looked stupid. I thought about simply going back later (much later) with a tapestry needle and stitching over the mistakes, which is how I’ve repaired a much smaller problem a few rows earlier on. But even I recognized that attempting this on 560 stitches over two rounds was, well, stupid.

No. There is nothing else for it. I have to tink (un-knit) two whole rounds and start them over.

Many, many, many words were muttered that shall not be repeated here for fear that my mother or grandmother might actually stop by for a virtual visit, followed by a physical visit and the ceremonial rinsing of the mouth with Lifebuoy.

Undaunted, I look at my work in progress and I say, “Welllllllllll…no, I’m not giving up on this yet! I think I still might be able to make it…”

Well, it means something.

I have a horrible, sinking feeling that I’m not going to finish this in time. I’ll finish it, and I’ll finish it soon, but whether or not I can finish it before the torch flickers out in Torino…is another matter.

In cosmic terms, that’s a big old ‘so what’. Who cares, really? It isn’t as though the eyes of the nation are glued to this blog or anything. No children anywhere in the world are going to perish if I don’t get this done, nobody is going to lose a million dollars (at least, I hope not – you guys aren’t betting on this in Vegas or anything, are you?!), I’m not going to lose my job or really much of anything.

I’m even just kind of impressed that I’ve gotten this far this fast, frankly. I’m even more impressed that I haven’t started in on another project, like, say, the baby hat I’m planning to knit up out of some Lorna’s Laces Angel for my daughter’s kindergarten teacher.

Not to mention the sock yarn I got from Lisa Souza (hand dyed, uber-cool), or the beautiful red alpaca that will make a perfect and dramatic narrow shawl to go over my elegant but rather dark black wool coat, or the black alpaca that has been waiting for a project in my closet and then I found this Really Cool™ shawl pin that said to me, “Hey! First, buy me! Then, knit up a lacy shawl to put me on!”

I never argue with inanimate objects when they speak to me. Mostly because when I do, people stare at me and move slowly away.

Will I finish it? Hmm. The drama mounts. I want to; for some reason, it has achieved a kind of importance. I’m not sure what I’m proving, to myself or anyone else.

Maybe that I do, too, have the ability to stick with one thing from beginning to end without getting distracted, or moving on to something else. That I don’t have a serious and crippling case of ADD and need medication to function.

Or maybe it’s just that I’m afraid if I don’t rush through this, if I don’t stick to the schedule, I’m going to put it down and never pick it up again. It’s a beautiful thing that Alice Starmore has designed, and it is an honor to be able to attempt it.

It would be even more of an honor to be able to wear it, and to say: “It’s a Starmore, and yes – I made it myself.”

I pushed my envelope, stretched my abilities in both skill and speed, and got it done in Olympic fashion.

That would be something I’d be proud of.

Tama, it'll still be a great achievement, whenever you finish knitting it.

Remember, not everyone can win at the Olympics. It's the participation that counts.

You'll finish because you have an audience that will demand pictures of the finished product and will give you no peace until we get them!

That is a gorgeous piece of work. I think the sense of honor belongs with the designer who is lucky to have someone like you take this project on.

I'm okay if you don't quite make the timeline but I am so looking forward to seeing the finished prodct. Oh yes I am.

I second the statement that we are all looking forward to pictures of the finished product. The world is full of techno-geeks, but there are so few artisans.

Well now, look who I found when googling around. Ms Tama...the mama of the big ol' brood! Thanks for the mention and give a nod to the old man from the S crew.