The Knitting Olympics have begun!!

In spite of being thrown not one but two unexpected curves over the first three days of these Knitting Olympics, this is what I’ve done so far: 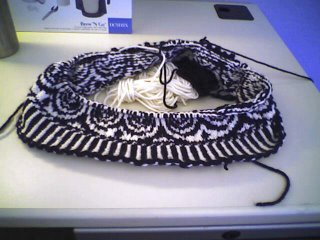 Curve #1: Ear infection in Toddlerland. There is little in the world that can so hinder a Knittelete like having a toddler shrieking and clawing at her leg for three days straight. Undaunted, I managed to get my stuff together and cast on, which leads me to…

Note to future Olympic Knitteletes: Don’t trust your memory. It is more full of holes than a sweater stored in an outdoor shed in Tineidae country. Trust me. I don’t know a single knitter who doesn’t have this problem. We always think we have #2 DPNs but are out of #1s, so we buy two packages of #1, get home and discover that we already have eight sets of #1 but no #4s. Also, we’re always convinced when we cast on a project using leftover yarn that we have more of the yarn in the stash somewhere. And we’re always wrong. Always. But we won’t discover this until we’re more than halfway done with the project.

Relying on the old memory. Fear it.

Irked, yet undaunted!, I dug through my craft closet until I came up with not one, not two, but three sets of #3 double pointed needles, which I used to cast on 280 stitches and work the 2” of rib.

It was a Stone Witch. It was hideously slow (by comparison) and the damned yarn kept slipping off the damned needles which caused me to say things like “DAMN!” and I missed most of the show about the dolphins on Discovery channel. DAMN!!

But showing the perseverance of my breed (and the strength of my French roast) (and, a little later in the evening, the benefits of a glass [or two] of decent Chardonnay), I carried on until finally I was able to get off the #3, onto lovely long #5 circulars and into the first of two distinct patterns.

I’m also losing all day Friday, Saturday and the lion’s share of Sunday to, ironically, a knitting convention. Yes, that’s right! Right smack in the middle of these Knitting Olympics, I am going to be wasting two entire days on what?

Undaunted!, I forge ahead! Show no fear! Death before dishonor! Yarn over, yarn back! Hup, hup, hup!

Hmm. I wonder if that gal teaching the ‘Advanced Finishing’ class knows how to do steeks…?