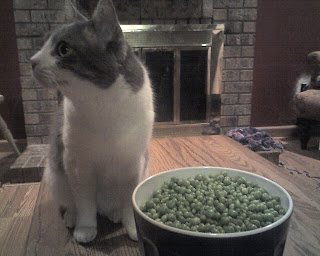 But don't count on it.

(she WAS actually interested in them right BEFORE I grabbed my Treo...but then she sensed her sangfroid was in peril and quickly adopted her 'what-ev' pose. Cats. Oy.)

(took four to six people two hours to shell these...and there will be about this many AGAIN in a few days! Yowsa!)

YUM! You are using your thumb to shell them, right? Just peel off the string on the pod, pop your thumb in and run it down behind the peas. Quick and easy. That's how my great grandmother did it and she was pretty fast! Oh the skills we lose when we don't garden for a generation or two...