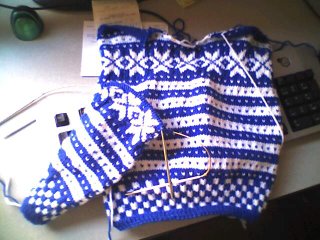 OK, granted. It isn't quite as much progress as might be expected, considering that this is for a wee little lad of only two (2) years.

The Rest: Eh…not so much

I have gotten the body of the sweater and about 90% of the first sleeve done. I’m rather pleased with myself for thinking to use two circulars instead of five double-pointed needles for the sleeve; it has gone much faster and with fewer wrinkly-bits. I seem to be physically incapable of allowing the yarn to ‘float gently’ across two needles.

Call it a character flaw.

Anyway. I didn’t do a whole lot of knitting last week, for which I proffer the following excuses (not that anybody cares, but still):

Item the first: My boss was out of town and I was one of his backups. Automatic five hour penalty to knitting time in the Monday – Friday period.

Item the second: My MIL was staying with us all week. Automatic twenty hour penalty to knitting time, for having a houseguest in the first place. Add another four hours per day because she is so stinkin’ fun to talk to, and I a) talk with my hands a lot and b) find myself bent over my knitting laughing so hard I can’t see when she’s around.

And yes. I miss her already.

Saturday I was home alone with the kids for most of the day, and Sunday for whatever reason (I’m suspecting someone cast a hex on me) my @*^&@ing arthritis flared up So! Stinking! Bad! that really…about all I could handle was sitting on my patookis watching DVDs or listening to music or surfing the Internet.

I took too much Tylenol, gave myself stomach cramps and a case of the jitters, and still found it too painful to knit on The Boy’s sweater. I briefly contemplated starting a new project with bigger needles (these are little size 3 US deals – kind of hard to manage when your hands are sore), but feared that if I did I’d somehow never return to it.

Let’s just say I have a certain history where that kind of thing is concerned. (And a few items in the bottom of the closet.) (And that this is why I never seem to have a pair #6 circulars, even though I have purchased at least three dozen of them in my time.)

It's getting cooler by the day, though, so I'm motivated! I have FOUR MORE sweaters after this one to get through, before the first snowflake falls.

(Which fortunately, in my part of California, should be in roughly, going with most recent statistics, 2015...)