The Continuing Comedy of Inconvenience


In other news, the comedy of inconvenience that is the school’s schedule deepens. In today’s installment, our hapless clown (me) discovered that on minimum days, yet again, everything is different. October, from this point forward, is all but entirely made up of minimum days.

See, here’s what I thought the schedule would be, from my reading of the approximately six thousand flyers handed out to assorted children in recent days:

Now, on the one hand, yes. That’s a lot of trucking back and forth for pickups on minimum days. But I was actually pretty happy about it, because I’d have three full hours with only Captain Adventure, and those three hours are three of his best. He’s cheerful and content to be dragged all over the place from 8:00 to about noon. Then he starts needing his nap, which means he starts being harder and harder to keep happy, until eventually he turns into a little ball of can’t-be-pleased exhaustion. And of course, after his nap he may be OK, but everybody else (including mommy) isn’t exactly the freshest rose on the bush.

So. We could, say, go to Costco. Or the bank. Or any number of open-early things. Plus, it was three full hours, instead of the two, two and a half I get ordinarily.

But no. That might have been translated to mean “convenient”.

Just like every other day. Boo Bug is in from 12:00 to 3:00, except on her track-off day…which I don’t understand, because I was told that there was no track-off for her class, and that her class is not on the year-round schedule but would instead be on the regular traditional schedule which doesn’t “track off” but rather takes summers off, only it seems her teachers think they follow red track in terms of being on/off school and see, the problem here is that my older kids are on green track, and…{sob, sob} I’m just so confused!!!!

I must have enemies in high places in the school district. Seriously. There can be no other explanation.

This has irked me to the point where even my pretty Pollyanna-like ability to find something good about the situation is strained.

I told myself, “At least I’m not running around to three different schools…”

To which I replied, “Hey, genius. For a little tiny bit more than you are currently paying for the State Sponsored Yet Not Really Much Less Expensive Than Private Daycare, you could pay for two full days (or five half days) at a school for Boo Bug, drop her off as early as 6:30 and not have to deal with her again until 6:30 at night, no matter what the older kids’ schedules are doing.”

“Well,” I then snapped at myself, somewhat testy because I resent the implications of the phrase ‘not have to deal with her again’, which implies that I am a Bad Mother who wishes to be free of her cherished and precious and otherwise adored offspring (who has just been told, for the SIXTH time tonight, not to hit her baby brother on the head with a wooden spoon). “If I just wanted to ditch her in daycare, I could take her to I’m A Mom Who Needs The Money Bad Daycare right across the street to play in their mosh-pit! We’re talking about getting her that preschool stuff the Omnipotent They say is so important for her future success as a Yale-educated lawyer!”

To which I said, “**snort!** Yeah right, look me in the eye and tell me 99% of your grousing isn’t because you want that ‘fewer or no kids’ free time bad!”

To which I said, “You’re on!” And I looked me in the eye, and I noticed that it has been way too long since I plucked my eyebrows. While I dug around in my drawer looking for the tweezers, I informed me that if I wanted to really go whole-hog, I could pay for two full days for both Danger Mouse and Boo Bug, and let the school do the transporting for Danger Mouse on those two days. See, this way, I wouldn’t even have to worry about the whole afternoon-kindergarten thing. Drop her and Boo Bug off after I drop off Eldest at school, then all I’ve got to worry about on those two days is Eldest’s schedule.

And even that, I told myself reasonably, I wouldn’t have to deal with…if I cared to pony up the measly little sum requested by the after school program so that my Eldest, who begs and pleads with me almost daily to be permitted to do so, could stay in the damned library reading and reading and reading with her Best Friend and Platonic Soulmate, the school librarian.

See, then? I would have two days when I dropped everybody off at 8, 8:30 at the latest and didn’t have to deal with them again until 5:30 (or so) at night. And it would only cost, uh, well, let’s see, at this point we’re up to about, uh, well, ahem. {mumbles} four-hunnerd-and-thirty-a-month.

Can you tell that it has been a long, long week? Oh yes. It has been. A very long week indeed - and the damned calendar informs me that it is only Wednesday. The husband hasn’t been home for bedtime the last two days, and while the kids (mostly) go to bed for me, they protest vigorously the whole time and then push the envelope as hard as they can without actually getting their little butts reddened. Also, they’ve been acting out more than usual – in point of fact, the middle two are currently ‘grounded’ due to having pulled all their clothes out of the closet and scattered them around the hallway upstairs, poured water all over the floor and counters in the upstairs bathroom, and taken away all the baby’s toys and tried to hide them upstairs in their room.

And now…this. I mean…I just…it’s only that…I…how can I put this delicately?

WHADDYA MEAN, I’VE GOT TO INTERACT WITH THEM…UH…MORE?!?!

And to you, the asshat in charge of the scheduling for {name withheld to protect the innocent} Elementary, I must say this: I will find out who you are, and where you live.

And you shall pay for doing this to me.

Oh yes. You shall pay…I shall sneak into your house in the dead of the afternoon, unplug all your appliances and then plug them in again. HAHAHAHA! You will be a "twelve o'clock flasher" forever (or at least until you can find a school-aged kid to reprogram them all for you!) (which you won't be able to, because their schedules are so impossibly whacky! Bwa-HAHAHAHAHAHAHA!!!!!!).

Meanwhile. I am telling myself, firmly, that I have four of the most adorable children in the world and should count myself incredibly lucky that I, and I alone, have the blessing of watching over their every belch and giggle all day, every day except for those few, lonely hours in which one, two or even (dare I say it) three of them are in school. Lookit these adorable little faces, shown here on Halloween 2004! 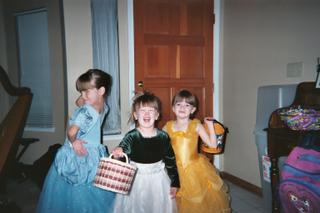 Wouldn’t you just kill to be in my shoes, watching over these three impossibly adorable little…darlings?

Well, you’re in luck! Coming soon to an eBay auction near you! Bid early, bid often!!

By the way – those costumes? Those costumes from last Halloween? Guess what they want to wear this year? Oh yeah. That's right. The Exact Same Thing.

And yes your kids are cute, but I'm sorry to tell you that *I* have the Cutest Kids Ever. I know it's true because whenever I thrust pictures in someone's fast and ask "Aren't they the cutest?", the person I'm asking always quickly says "yes".

Hey - whatever it takes to get out from under the tyranny of the world's most ridiculous schedule works for me - do it! The other option is to go to the District Office and at least get your kids on the same colored track. I'm sure that is the norm and you have just been dealt a mistake.

Yes they are adorable (although mine were cuter, of course :-)