Always good to have help…


This morning, I broke one of my favorite bowls. I have had this set of nested glass bowls for at least ten years now, and they’ve been one of those “what a great purchase!” purchases. Used daily and so forth and so on.

I broke one a while back, and have mourned the loss ever since. It was, naturally, one of the most useful bowls in the set, the one that was just right for rising bread or mixing things that were “sloppy” – enough room to prevent sloppage but not so huge that it was hard to handle. Then, this morning, the stars aligned themselves juuuuuuuuust right and…as I was just beginning to lift them out to get at the ‘just right’ one for scrambling half a dozen eggs…

Captain Adventure let out a shriek that sounded as though someone was driving an ice pick into his ear
AND
Eldest came skidding into the kitchen babbling in Shriek Voice about something to do with Boo Bug not having buttons on her sweater
AND
I jumped (I did not hear her coming before suddenly she was upon me!)
WHILE SIMULTANEOUSLY
My wrists, which have been a bit annoyed with me about all the knitting, holding Captain Adventure (have I mentioned he weighs 24 pounds now? have I? have I? HAVE I?!) and writing longhand last weekend, chose that precise moment to give me a stab of honest-to-goodness pain
AAAAAAAAAAAAAND
{SMASH!!!!!}

I am proud to say that, in the presence of the ever-attentive Eldest, what I said was literally, “Gosh DARN it all to HECK!!!”

Followed by the barked command of, “Out! OUT!” as I surveyed the swatch of destruction across my kitchen floor. Not one, but TWO of my remaining glass bowls lay in varying degrees of flesh-slashing shards from one end of the kitchen to the other.

But that’s not what I’m writing about this morning.

I’m writing about having help.

Inspired by the loss of the three most useful bowls in the set, I decided I needed to replace the set. I sat down for a moment and began noting down the things that need replacing around here, so that if and when I get around to it, I can get/order everything at once.

Then I got up, leaving it lying there while I raced around making lunches and snacks and finding “lost” shoes and jackets and nagging children into putting same onto their bodies. (WHY will they go through their closet, shivering the whole time, and pick out the one (1) sleeveless dress that is still in there?! WHY?! Crazy little creatures…)

Having now completed the first school circuit of the day, and the younger two kids being settled with toys and music, I stuck my coffee in the microwave and picked up my half-begun list to find that I had had a little help.

In case I had forgotten, this is a Shopping List. 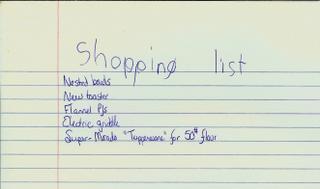 Now, be a dear, won't you, run to the store and find them for mommy? Preferably on sale, decent brands, pick up your siblings from school and bring me back a mocha while you're at it...?

Hey I have those bowls, too! Some of them, anyhow. The cute little teeny, tiny one got appropriated by my kids years ago and I haven't seen it since. One of the intermediate size ones smashed along with 2 Pyrex casserole lids (I didn't even know glass could fracture into that many pieces!). I use the remaining ones daily but they look pretty bad. If you find a great replacement set please tell me where you got them. I'll buy a new set as an act of sisterly solidarity - or maybe just because I need them.

I hear there's a woman in Hollywood who creates movie titles and gets $25,000 a pop because her titles are so snappy, the movies she names always do well at the box office.

For that moeny, you could put Eldest to work and be able to lengthen the list.