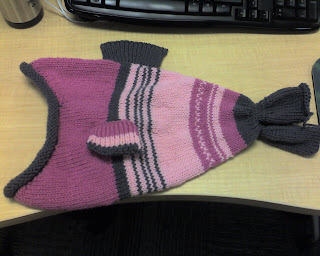 Working on this hat is a marvelous exercise in observational psychology...ESPECIALLY when you get started on the fins!!

People always watch you knit on trains and buses and planes. They can't help it, really...the human eye is drawn to movement in any case, and then here is this fascinating THING going on: Two sticks and some string are making a "something"...something beautiful, and/or practical, and/or warm...and/or whimsicle.

But for the most part, they watch from the corner of their eyes, working hard at pretending they most certainly are NOT watching. It is rude to stare, and strangers mad enough to be wielding pointy sticks are probably dangerous, not to mention the likelihood of "artistic temperament"...prone to some combination of emotion and lecturing at GREAT length about something mind-numbingly boring, like the relative virtues of this or that mordant, or the vegan properties of bamboo, or how many spectrum-bands are absorbed by this PARTICULAR purple.

And then finally, driven too near the chasm of madness...they MUST break the invisible wall, shatter the unspoken law that says we commuters must at all times maintain a certain sangfroid, they must, MUST!, brave the potential horror speaking to a stranger-than-usual stranger ON PUBLIC TRANSIT NO LESS!!!...and ask.

(This morning, a weathered man in about his late 40s with obvious true grit grinned like a boy and said, "I'd love one! But in blue. Gotta protect my dignity with the boys at work." The Fish Hat - helping people everywhere find their inner whimsy!)

My favorites are the ones who just stare out of the corner of their eyes...and then at the last possible minute they blurt out, "Is that a sock?" (it always is). They're so curious, but timid. I love it! :-)

It looks great! And... not that you have gobs of time floating around, but I think it'd be hilarious to knit up a blue fish hat for that 40'ish weathered man and see if he actually wears it! My knit a pumpkin hat a few years ago for my 33-year old sister. She's an elementary math curriculum specialist for Fairfax County and she wears it every October.