First: My husband and I got breakfast together. In a restaurant. Alone. We discussed The Future. We weighed the pros and cons of moving, staying, McMansions, hovels, farms and redwoods. Ultimately, we decided not to decide for sure just yet. This is a hard subject. I do want to move closer in for a lot of reasons, but staying put makes a lot more sense. Property taxes alone…but let's not ruin an otherwise pleasant afternoon with such discussions, shall we?

It was, however, very, very nice indeed to be able to discuss these things in 'neutral' surroundings (so that I wasn't thinking about how lovely our house was and he wasn't thinking about all the maintenance that so obviously wants doing) and without anybody hanging off any part of either of us screaming, "MOMMY! DADDY! {$SIBLING} took my {$TOY} and called me a name!!!!!!"

Second: The new dishwasher has arrived, is installed, and currently doing its first of many loads of dishes. We are pleased. We are very pleased. It is quiet, and has this thing where you can pour an entire huge bottle of liquid dishwasher detergent into the door and be set for three months. I consider this to be an upgrade. Mostly because I am lazy and have a very crowded under-sink space. Anything which removes a box or bottle from under that sink will be hailed as a "Modern Marvel".

Third: It is 2:30, and I reached 40 hours of work two hours ago. With this lazy day, we are likewise pleased. I have spent the last two hours tinkering around with things, but I wouldn't call it really working. In about five minutes, I'm shutting down for the three day weekend and moving on to…

Fourth: I have finished one preemie outfit, and nineteen (and a half) of twenty blocks for a wee little blankie. The preemie outfit, as usual, is so shockingly tiny that I say to myself, "That just can't be right!" and I think it was an utter waste of time to knit it. Because there is no way that a human being, however newly minted, could possibly be tiny enough to wear something Boo Bug snuck out of the knitting basket and then put on her 12" stuffed bear. But then I remember: they ask that the newborn hats be about the right size to go on a lime (!), which makes this little thing perfect. 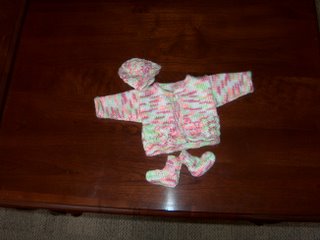 If I were a better mother, I'd probably take advantage of this early day to go and fetch forth mine offspring from daycare early and go to frolic in the daffodils or something. Instead, I'm going to finish the baby blanket. It's going to take a lot of seaming and seaming of such quantity is best done in peace, quiet, and accompanied by large quantities of rum and/or vodka and citrus juice. And a good crime show. Cold Case Files or something. Besides. We've got three whole days to make each other utterly crazy bond as a family, so I figure I'd better take the last couple hours of peace when it's offered. Behold, the pile of seaming: 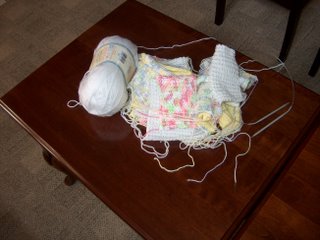 Fifth: Captain Adventure likes to watch bread bake. Turn on the oven light, and he's one happy little camper. Goes and gets his little chair (which otherwise is ignored and collecting dust in the corner because he is far to busy to sit on anything) (other than his mother, of course), and will sit there and watch the bread baking with unblinking fascination. 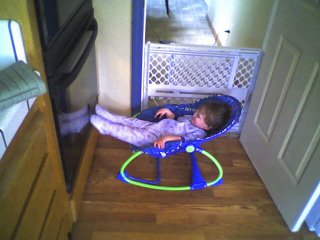 That is the most lovely little baby outfit! Just beautiful!

Btw, we paid, oh about 7500 in property taxes for a year. One fricking year. One.

Have a great weekend!

I hear you on the tax thing but of course you know you have to calculate the commuting cost thing, too. And the time... there's always the time. But moving in this area is painful. Very painful. Thank goodness for cool dishwashers!