Good gravy, time does fly. Seems like just yesterday I had a newborn in the house, and today I’ve got a sturdy little man of twenty one months, three weeks.

The Experts™ at Baby Center, always eager to help me out with things, enthusiastically asked me if I had time to spare (uh, no) and then went on to espouse the virtue of ditching the stroller and letting Captain Adventure take point on a walk around the neighborhood.

“You'll be amazed at how many times she'll stop to check out small objects such as an interesting rock, a dead leaf, or an ant hill. Your toddler isn't trying to drive you crazy by dawdling. To her, the journey is as exciting as the destination and the small details of the world are irresistible to her now.”

His little legs are pumping furiously before he even hits the ground, and when he leads the way, he does it at a dead run. Laughing wildly and casting occasional glances to ensure he is being chased, he will go full tilt until he runs out of sidewalk.

Now, this isn’t to say that he doesn’t spend a lot of time being engrossed in seemingly small details. We have some charming video of him playing with dominos – shown briefly how to set them up and knock them down in rows, the kid went to town with it. He could do that for hours. And chew on the dominos, which apparently were quite tasty. (However, being cheap Chinatown dominos, they were also coated in black ink that came off all over his little face.)

Speaking of putting things in his mouth, this is the other problem with letting him be a free-range toddler. The kid puts the most ungodly things into his mouth. He is the sort of child who will put even things which taste nasty into his mouth, purely because he knows I don’t want him to do so. He turned around the other night and stuck his tongue out at me to show off the fact that he was chewing on a point protector. One of these dealies: 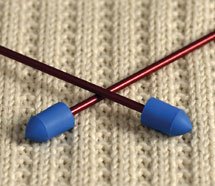 They taste nasty. (Just trust me on this. Don’t try them. You will regret it. Don’t say I didn’t warn you.) There are much better things to chew on. This was simply an act of chewing on something that he knew would make mommy batty. “Ha ha, look at me, I’m chewing on one of those blue thingees you don’t want me to play with, ha ha!” And then when he sees me coming with that “I’m so gonna take that away from you” glint in my eye, {trumpet sounds!} we’re OFF to the races! You cannot catch me, I am a gazelle!!

Horrible child. But I digress.

I can only imagine what it would be like to turn him loose on an unclean neighborhood. Dead birds, moldy walnuts, dog poop…he’d be going from one vile ‘treasure’ to the next with me jogging along in his wake screaming, “No! No! Eeew, no, no no no no nonononononononono. AW, NO!”

I’d probably need a week’s rest at a nice sanitarium for each ten minutes of “walk” we took. And an hour of therapy sessions. “So. When your son put the slug into his mouth, how did that make you…feel?”

Therein lies the difference between the boy child and the girl child. When my boy was two, my mom and dad got him this oversize Tonka dump truck with handles on either side. He'd hunker over, grab those handles, and run as fast as he could all over the place. Noise and speed! The best combo!