I was kind of waffling about whether or not I'd get another steer this year...while last year's is quite depleted, we still have a fair amount of beef out there in the freezer.

But, when the young lady we bought from last year got up there with her handsome little steer, well...the bidding was slow to start. And somehow, I just didn't want her steer going to go to one of the business-buyers.

I didn't want to hear the auctioneer say, "...and that's retail..." - meaning that the buyer is going to pay the difference between 'retail' price and his bid, and his final bid, and the steer just...goes to the regular old meat market.

Knowing how hard she's worked with him, how much she cared for and about him...I just really wanted him to go to someone who would think about these things, at every meal.

So I bid, and I won, and more than once (six times in all, actually - one steer, two hogs, one lamb, one turkey and one rabbit...the last two weren't on my LIST, but I was under-budget and again...the bidding just wasn't HAPPENING for these kids.

And that's half (or more) of the point; this method of meat-acquisition brings together two of my favorite things: super-fresh, super-local, hands-on, I-know-who-grew-it food, and children.

And to see their faces glowing with that peculiar blend of grief.(after all, one way or another, good price or awful, this is their last day with their animal), pride and happiness when, instead of ending up under-market and below-cost and their animal off to Just Anywhere, somebody jumped in and brought that price up to market-average and threw up the 'C' for custom (which means it is going to be custom-cut for the buyer's personal consumption)...well.

It's a pretty neat thing to see; it's an honor to be that person.

I hope I get to keep on being involved in this event for many, many years to come. 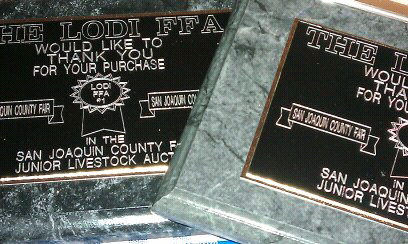 Being related to some mighty awesome sheep raisers - one of which has her doctorate in animal genetics - I can't say enough about how 4H and the like keep this going.

Yes - it's a bittersweet moment at the sale.
Though I had found it best not to ask the name of the animal. Mentioning that you're eating SueSue rather than lamb #13 as souvlaki is a bit of a meal dampner.

A clear example of both dog gopod and doing well - one doesn't have to exclude the other.

Oh - and congrats on getting an au pair/nanny.

Good on you! As a former 4-H gal myself, I think this is pretty special. Thanks for supporting these kids and all their hard work.

I love the family farm we buy our meat from, but damn...this is a lovely way to do it. Happy eating, Denizens!

No wonder you think you need a bigger freezer. I would struggle to get a hind-quarter of beef into the chest freezers they sell here, let alone a whole steer.

We've bought a part of a steer before, but from a farmer. We never though about going to the fair. Our current freezer wouldn't hold much more now anyway, but I'll keep this in mind should that situation change.