With due thanks to Tylenol Arthritis Pain… 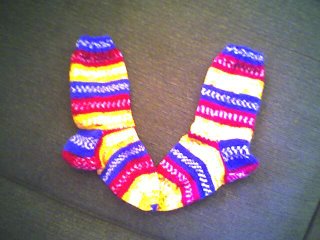 It’s funny – when she first chose this yarn I was a little surprised. I have a lot of ‘girlie’ colors in the box, but she chose the one I was thinking I’d use for Captain Adventure. Because it’s blue and yellow and red, I said to myself. Kinda ‘boyish’.

But as I got to working with it, I discovered that the color I thought was red is actually mauve (and a rather pinkish mauve to boot) and by golly – these really are ‘girl’ socks.

Which is why I am not an artist. I have little-to-no color sense whatsoever. “Why don’t you work in colors?” people ask me. “Why don’t you do more Fair Isle knitting? Something with twelve colors no longer available in the yarn the designer used so you have to substitute things using your own intuition as to whether or not you’ll be able to get gauge and color matching?”

Um…because I think ‘antique’ and ‘white’ are the same thing? Because I can’t tell you if something is more orange or more yellow? Because I mistake mauve for red? Because I have been known to create the most monstrous of things when I thought I was doing something beautiful, and not realized it until someone else pointed it out? (Like the infamous sweater I knit on our honeymoon, which upon reflection was so ugly it should have melted the needles but which I thought looked great until my poor newly-wedded husband finally said something, at tremendous personal risk but for the good of humanity.)

And, now that I’ve said how rotten I am at color-work in general and substitution in particular, I’ve taken it into my head that nothing else will do! for my boss’ impending new arrival but to make the beaded fair isle cardigan from Debbie Bliss’ book ‘The Baby Knits Book’.

Can the yarn she used be gotten, for love or money? No, and maybe-if-you’ve-got-a-lot-of-it. Which I don’t, alas.

So what am I doing?

Substituting, yarn and colors both.

The poor, innocent little baby. I’ll probably produce something that looks like it belongs on something out of Nightmare Before Christmas. And wrap it up and give it to them anyway.

Mismatched beads and all...

That baby sweater is beautiful.

I nearly died when I saw the price the website was charging for the yarn, until I realised it was in AUSTRALIAN dollars. Hello Aussie website!

Tama, I can get this yarn for about £3.50 a ball (it's British). Would you like me to pick it up for you and send it to you? Once I've worked out the postage (yarn is light), you can reimburse me via PayPal.

I did the same thing with the Australian site! FIFTY DOLLARS ARE YOU INSANE?