I mentioned in my last post that I had started volunteering with an animal rescue – which is a bit of an understatement because as is typical for me I threw myself into it with wild abandon and very quickly went from “just” fostering “a few” kittens to having a finger in waaaaaaaaaaaay too many pies. At this point, there really isn’t much going on at the rescue that I’m not involved in to one degree or another and during the height of kitten season I had as many as sixteen cats and kittens in my home. (That…was nuts. Fun! But also nuts.)

It’s been an amazing experience. I had no idea what-all went on behind the scenes in the animal rescue world, from the sheer volume of “unwanted” pets in our sleepy little town to the downright insane costs involved in upgrading them from ‘unwanted’ to ‘beloved pet.’

One of the things I found the most surprising was that the adoption fees only cover about half of the actual cost to rescue these babies. Like everybody else who has forked over $100 or more to adopt a kitten from a rescue, I assumed that my fee was actually more than the “true cost” of getting that kitten into my hands.

After all, the animals themselves are usually free, right? Found in boxes and bushes, sent over from an overwhelmed city shelter, turned in by people who do not want a bunch of feral babies living in their garage – how much could it possibly cost to feed them for a month or two, get them fixed, and get them up for adoption?

It’s true that if everything went absolutely perfectly for every single rescued pet, we would at the very least break even and possibly even make a few bucks on each adoption. (At least on the cat side. The puppies are a whole different level of expensive, and I doubt we’d be able to even break even without pricing 99% of our adopters out of the equation.)

But we’re a rescue. We’re the people the city shelter will reach out to in desperation when they have pets come in that they aren’t equipped to save themselves – the ones who are too young to survive without specialized, round-the-clock care. The ones who are injured and need expensive surgery or other extreme care to recover. The ones with psychological issues, born to feral mothers or having suffered at the hands of “bad” owners, who need a lot of extra time and effort to turn around.

While we do sometimes get those “perfect” kittens who come to us healthy, happy and well-adjusted…they’re the exception, not the rule. Most of them come to us at the very least suffering from upper respiratory and/or eye infections, heavy parasite loads, and malnourishment.

Far too many of them come in with even worse problems; Cherry Darling is a perfect example. 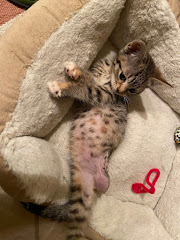 We have no idea what happened to her leg before she came to us (our best guess is that she tangled with a car), but it was bad and the leg had to be amputated ($1800 even with a rescue discount). It took about six weeks for her to recover (roughly $400 in supplies and medications), and to receive her spay operation ($70).

Her adoption fee? Still $135, just like every other kitten her age.

There is an elephant in the room on this deal, a question that everybody is thinking but is reluctant to put out there: Is it worth saving kittens like her? Wouldn’t it be better to simply put them down? Sure, euthanasia isn’t free so we’d still be “losing” between $200 and $500 bucks on that deal depending on which vet did the deed, but, isn’t that better than throwing over two thousand dollars into saving her?!

Believe me, we are forced to ask that question over and over again…our decision making process is exactly the same as it would be for our own beloved pets and the primary question to be answered is what is the expected outcome?

If they are going to be able to fully recover and live long, healthy lives then we will choose to fight on.

If all we’re doing is buying them a little more time that is going to be full of pain and misery…we will authorize the vet to let them go.

But I understand where people are coming from when they think we should be more focused on minimizing the cost – the world is full of big problems, and there are always more needs to be filled than there are dollars to throw at them. And with so much human suffering, is it right to be spending hundreds or thousands of dollars to save just one (1) kitten?

I can respect those who disagree with me that it is worth doing, but would humbly submit that saving companion animals is also saving humans – not in a direct physical way, granted, but, well, hear me out.

I facilitated over five hundred cat adoptions last year – I’ve seen over and over again how uplifting and healing it can be for people to welcome a furry ball of unconditional love and trust into their lives. I’ve seen people grinning from ear to ear, or even breaking down into tears of joy as they clutched the pet they’d just adopted to their hearts.

I often get updates after they’ve gone home, too. So many stories of kids who have found it easier to cope with distance learning with their new kitten purring on their lap while they work, of lonely adults who feel less isolated and alone with their kitty sleeping in a bed on their desk while they work, of families drawn together by sharing the duties around their new puppy.

And for me personally, well, there’s this guy. 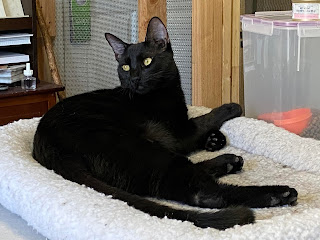 Tagalong here was also one of the “expensive” kittens whose cost to rescue way exceeded his adoption fee. He came into rescue at only two weeks old, and not only needed to be bottle fed every few hours around the clock for a couple weeks (kitten formula runs $25 for a 12-ounce cannister of powder, so it adds up in a hurry when we have to bottle feed!), but also needed stitches for a leg wound.

He then came down with a raging case of calicivirus that ultimately required three rounds of increasingly intense antibiotics to treat the side effects of the virus, and several trips to the emergency vet for things like spiking fevers, astonishingly intense diarrhea, and nasty infected mouth sores that made it impossible for him to eat or drink.

Was he worth all that extra time and money to save? I’d say so, because he rescued me from an intense grief over losing my sweet little Pooh Bear the previous year. I’d never had such a deep emotional bond with a cat before she came along, and just couldn’t get over suddenly losing her to feline infectious peritonitis at only nineteen months old.

There was a lot of ugly-crying, and every time I thought I was finally past that phase of grieving…nope, suddenly thought of her and here come the next round of waterworks…

And then suddenly, here was this foster kitten crawling into her spot at night. Insisting that I arrange the sheets into a little ‘nest’ for him, just as she had always done. Suckling on my shirt exactly as she did. Following me everywhere I went. Interjecting himself into every moment of my day as if he thought it was his sacred duty to do so.

He didn’t “replace” her – but he definitely filled up that big empty space and make me feel whole again.

There are two sides to rescue: The animals who are in need, and the humans who need them.

You're a good human.

Just stumble back here following a lost bookmark. Took a moment to remember how much I enjoyed reading you and that I had missed you when you went on hiatus. Pleae, keep writing. Your viewpoint on the world is kind of what we need right now. Take me away from my "oh my god is it still 2020? did it every end?" existence and let my mind wander over to your house.
Thanks

Awe! Love those black kitties. We have 5 in our (fixed) feral colony.

Glad to see you're back. We have been rescuing keetons as well, and I have one adorable fluffmonster who, ahem, did not leave us when she was old enough. We knew the risks when we fostered her, since she was not rounded up until about weeks old (which is just about the cut off for socializing most ferals) but she's our litte sweetie and we love her. Even if everyone else thinks she's invisible because they've never seen her in person...

I love your cat stories, Tama. Glad you've still got the blog. Sorry that I missed you'd burnt out. (Sorry that I wasn't there for you.)