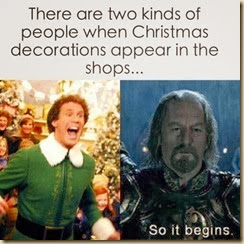 I know what you mean about the Grinch thing. I'm not that fond of "shopping" at the best of times - got to be in the right mood and allowed to wander around and get distracted on my own timeline, etc - but at Christmas, it's a nightmare. (Irony of ironies, DH loves shopping. He adores Christmas shopping and is great at it.)

Send the sweater to me if it doesn't fit. I will love it and hug it and feed it and call it Gorgeous. :-)

Right with you on the appallingly early onslaught of Christmas stuff. I love the holiday, but couldn't they stop rushing things so much? Maybe at least let us get past Halloween, for pete's sake!

I love this! I am exactly this kind of person, my current stress is "WHAT do I get for the holiday White Elephant Gift Exchange", which is (*gulp*) next week??? Despite the fact that I *know* it doesn't matter, I'm still utterly wigged out, not in small measure because it means I have to GO SOMEWHERE on a weekend in December that is not the grocery store!

I go into the mall with a list and stick to it like glue otherwise I get all distracted (ooh, sparkley, shiny things) and end up all annoyed and shouty. This year, I've been doing a bit more on-line shopping and I like it. I like it a lot.

If I had adorable pictures and a LOT more skill at knitting (and was more betterer with words) I could have written exactly this post.
I love giving gifts. I hate the obligation and pressure of finding THE gift at THE right time amid all the other "Being merry requires me to stab you all to protect my kill... I mean purchase... and bring it home to my starving... I mean expectant... family" shoppers.

Tis the season to hide in a bunker somewhere, until the *real* "War on Christmas" is over.


I've been exploring for a bit for any high quality articles or blog posts on this kind of space . Exploring in Yahoo I ultimately stumbled upon this web site. Studying this information So i am glad to exhibit that I've a very just right uncanny feeling I discovered exactly what I needed. I most indisputably will make certain to do not fail to remember this website and provides it a glance regularly. facebook login in