I am so tired right now it defies description. SEE, for reasons too bizarre and random for me to really grasp, I got to enjoy one of my not-as-rare-as-I’d-like-them-to-be bouts of inability to sleep. I finally got into bed at about 1:30 in the morning. And then it took forever to actually get to sleep.

And then my alarm went off at 3:30. You know, like it always does on my in-the-office days.

I punched that snooze button like it had stiffed me with its bar bill the night before. Which was really unfair of me, seeing as how it was actually the buzzer that was offending me.

I fully intend to go to bed as shortly as possible.

And I probably won’t, for reasons that will make no sense whatsoever (cough-WARCRAFT-cough).

I think the thing that irritates me the most about these weird little attacks of inability-to-sleep is that they are not at all the same as “not being tired” or “not wanting to go to bed” or even “being so busy having fun that one simply can’t go to bed, wheeeee.”

It was more like, my eyelids are constantly sinking into a verrrrrrry prolonged BLINK and I’m so tired I think I’m gonna die BUT YET I’m also agitated and wired and also DAMMIT HOT FLASHES, NOT RIGHT NOW I HATE YOU I HATE YOU SO MUCH ARE MY EARS LITERALLY IN-FLAMES-ON-FIRE-RIGHT-NOW AND @^*&@ MY BACK HURTS AND ^@&^@*& MY HIP HURTS AND @*^&@*^&@ YOU, WRISTS, YOU’RE JUST BEING WHINY TO BE DOING SOMETHING AND WE BOTH KNOW IT!!!!!

Kids, take it from me: Being a “grownup” is not as cool as it looks on paper. Especially when you’re a female grownup of the ‘more than halfway through your 40s” group, because perimenopause becomes “perfectly normal” for you even though you totally do not feel (or act) “old enough” for it.

Also, my ears were burning all day long. JUST my ears. And sure enough, whenever I went into the bathroom, they were bright stinkin’ red, like I was terminally embarrassed or something. Screw you, hormones, you’re on your way OUT and GOOD RIDDANCE TO YOU.

So let’s just say I didn’t exactly have high expectations in re: productivity today.

But somehow, by the end of the day, I’d actually gotten quite a lot done. Figured out a couple issues that have been sitting “out there” forever. Put some finishing touches on one thing, roughed in the outline of the next piece of it. Smoothed a few ruffled feathers. Stuck my foot in my mouth only once, but was able to extract it without, you know, surgery.

Yessir. Somehow, I think I ended up being a Really Useful Engine today. Miracles: Believe in them!

SPEAKING OF ROUGHING THINGS IN…you know how teenagers will go hiding in their room for hours on end and you kind of wonder what they’re up to in there? Like, are they secretly vampires, afraid of the deadly Day Star? Or perhaps they’re hibernating, like bears, and intend to only emerge when they’re safely past high school? (Would not blame them for that…) Or maybe they’re racking up several hundred terabytes worth of text messages? Or trying to figure out how to hack past the parental controls on the Internet?

Well. Here’s the kind of thing Eldest gets up to, pretty much whenever she’s not being forced to do something else. 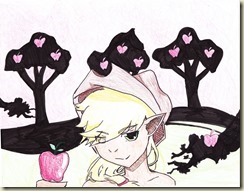 I will never stop being amazed by things like this. Especially since personally, when it comes to drawing, I have all the artistic talent of a rock. Whereas Eldest will sit down at the kitchen table with a set of colored pencils and produce… 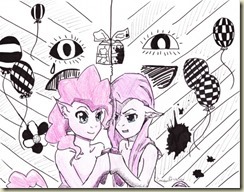 (She says she doesn’t like this one. It’s just not quite THERE somehow, you know, I mean, eh, she says. I think it’s awesome. The more I look at it, the more awesome it gets. Even if it is a riff on My Little Pony. Which is not really my thing. Whatever. I like it. The end.) (Really. The end. Because, Warcraft. My guild has gone without my presence for almost forty-eight hours now. Gah only knows what-all may have gone on while I wasn’t on to make wisecracks about It All and otherwise not actually HELP much…)

So sorry about the flaming ears! Thankfully at this point I mostly just have random mood swings and such. (Well, husband might prefer that I have the flaming ears...dunno!) Have you tried evening of primrose oil? It's supposed to be incredibly helpful with such things.

Also, Eldest's art is fantastic! We should get her and my darling daughter together - they have somewhat similar styles, I think. And dd also spends many, many hours hibernating in her room with her art, so they could relate on more than one level. Talented kids - who knew?!?