Meanwhile, on Lifestyle of the Poor and Stupid…

Some time ago, Your Faithful Correspondent went to her local supermarket/pharmacy in search of nasal decongestant that would get the job done.

You know, the kind that (in California) you have to produce a driver’s license and fill out home address information and all kind of stuff so they can track exactly how many boxes of the stuff you’ve bought because <sarcasm> $DEITY knows this totally prevents people from cooking up batches of meth in their kitchens or the trunks of their cars or whatever-all else people do such things. </sarcasm> 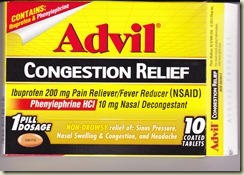 NOW. When I got to the supermarket/pharmacy, they had changed their rules such that instead of going to the pharmacy to get these things, you took the card from the shelf to the front register, and then the cashier would go get the product for you from a locked cupboard located somewhere near Tibet or possibly Antarctica not so very close to her register.

This makes perfect sense. Because why have the pharmacy technicians in charge of such things? After all, it’s not like they would have any more insight into such things as what-all are the key differences between Brand A and Brand B, or what the box actually looks like, or whether or not it will take six months and several governmental-sized bribes to get a new shipment of the stuff in if what you’re looking for should happen to be out of stock.

And cashiers love to be sent scurrying all over the store trying to get these answers. Particularly if they have long lines of irate customers who are all dealing with the spring-time allergy + cold season. Because it’s so restful for them and all.

So when I got to the front of the line and presented my pull-card for the twenty count of Advil Congestion Relief + Meth Ingredients, the cashier rolled her eyes pointedly, muttered something that sounded vaguely like, “If I could have just five minutes in the ring with the yahoo who thought this was a good idea…!” and schlepped off to Burma in search of the holy grail.

And then she came back with the ten count and announced that there were no twenty count packages available.

We will go through a box of ten, even at one-pill-per-dose, in nothing flat.

And two, the twenty-count was on sale.

So I asked if, seeing as how they were out of the size I needed and all, we could do That Thing that the pharmacy has done for me I dunno how many times in the past, and I could get two boxes of the ten-count for the sale-price of the twenty.

Which apparently hit her ears like this: “Prove that a countable set of parabolas α(y−β) 2 +γ=x , for α,β,γ∈R , doesn't cover the entire xy plane.”

FIRST, she went back to the Bermuda Triangle to make absolutely sure they did not have the twenty-count boxes. Since I was going to be difficult about it and all.

THEN, having ascertained that neither Jimmy Hoffa nor a twenty-count box were lurking in the bottom of the Dead Sea, she pulled on her parka, raised some huskies from puppies, hitched them to the sled she carved from hickory she cultivated herself from seeds, and sledded to the pharmacy over in the North Pole; there, she consulted Santa and eight of the twelve disciples so she could come back to tell me that sure, yes, of course they could.

THEN she switched to her mountaineering attire and scaled back up Everest to get me the second box of ten-count.

AND THEN…well, we had a problem. And it was called the register wouldn’t let her do it.

Which is not actually true, as was pointed out to her by three separate people – the problem wasn’t the register, it was the fact that she couldn’t scan the 10-count boxes and then attempt to override the price.

“Look, you hafta type in the number, from here,” the manager-on-duty told her brusquely upon being summoned for the second time over All This, jabbing a finger at the UPC numbers at the bottom of the pull-card for the twenty-count box.

“Prove that a countable set of parabolas…”

This went on for a ridiculous length of time. One of the pharmacy techs told me a few days later that his fingers were itching to just grab the boxes from her, take me over to the pharmacy register, and do it his damn self…but this is now Against Policy™, so all they can do is stand helplessly by while cashiers rummage through the non-prescription-but-controlled-sorta-at-least-in-California bucket looking for things they can’t find, and/or grabbing the wrong thing at least four times, etc.

After several attempts to scan and adjust the price, she eventually just shot me A Look sideways, scanned both boxes, did something random with the discount button, and in desperately matter-of-fact tones read off a total that was a tiny bit too much to be the twenty count sale price, but considerably less than the cost of two ten-count boxes.

I wrestled with myself for a moment about it, because, principle of the thing. But then I decided that on the whole, I really didn’t want to grow old and die standing there at the register arguing with her over about eighty cents worth of price difference.

Plus the people behind me were getting restless.

And I couldn’t blame them. I’ve been behind That Person too, you know, the one who wants to fight to the death over whether or not a $0.10 coupon which expired in 2006 is ‘still good’ or can be used on a product that isn’t the one specified (“but, it’s cereal! it totally should count!” “ma’am, this coupon expired in June 2009, and also is for Post cereals only. You’ve got our biggest bag of Captain McCheapy’s Sugar Coated Nuke’ems, which are not made by Post. Even if it wasn’t expired, you cannot use a manufacturer’s coupon from Post on a Captain McCheapy product.” “BUT. IT. IS. FOR. CEREAL. AND. THIS. IS. CEREAL!!!”)

So I shut up and paid the extra $0.80 and grumbled all the way home, threw them into the medicine cupboard, and called it a day. And forgot all about it pretty fast because that’s kind of how I tend to be; I’ll get irrationally pissed off about something really minor like this, but it blows over fast and by the next day I’m usually confused when you ask me if I’ve gotten over, you know, that thing I was ranting and raving about the day before. Huh? WHAT decongestant? I don’t remember being mad about decongestant, that sounds like a really stupid thing to get mad about…

But then today, I was digging around in there and noticed that, as is typical around here, both boxes had been opened and a few of the tablets used from both. Argh. And I decided that I’d go ahead and migrate all the tablets into just one box because it would be less clutter.

Which was when I noticed that the second box…was not like the first. 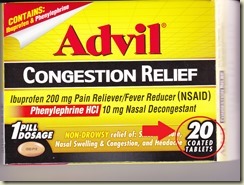 (For the record, I really can’t blame the cashier for this one…these boxes are absolutely identical in terms of size, shape, color, everything except that “10-v-20” on the box, WHICH is not as obvious when you’re looking at the two boxes in your hand as it is when someone has scanned them in and helpfully circled AND drawn a large red arrow on the box using their mad Microsoft Paint skilz.)

I honestly can’t decide whether I find this hysterically funny, or insanely irritating.

Because now, well…this kind of means that I got that ten-count box for only $0.80. Which is about five bucks less than it should have cost.

BUT, I also know, I KNOW FOR A FACT!, that if I were to take these two boxes back to the supermarket/pharmacy, and march up to the Customer Service desk and say, “Hi, yeah, so! Funny story, {tells whole story, in three-part harmony and with several reprises of the chorus}, soooooo, I figure I must owe you about five bucks? Ish? But I don’t have the receipt anymore and can’t remember exactly what all the prices were, soooooooooooooo…yeah. There it is, then! Think we have some way to figure all this out?”…

…they might just call security on me, you know? And that’s a road I don’t want to go down again, believe you me.

So I guess I’ll just have to live with the guilt and stay away from any anime series with “bad people get their comeuppance” themes for a while.

Because otherwise, I might just have nightmares about that five bucks.

And that whirring noise you hear is just my head spinning.... I went to the prescription stuff a few years ago, but the Hubster still uses the OTC product that has to be signed out at the pharmacy (and thank Dog that is still the case), and you have to swear that it's for your personal use -- only he won't do the shopping for it, so I'm swearing to it, and feel like I'm going to H-E-double hockey sticks for that.

And yeah, trust me, you don't EVER want to try and give someone money back. If you think what you just went through was bad, that is ten times worse.... :-) Apparently only nuclear terrorists try and give money back at registers....

Guess what?
It gets better.
I *think* that the boxes you scanned aren't even the type of stuff that's controlled (at least it isn't here in the Midwest). In the Midwest, Pseudoephedrine (Sudafed) is controlled and Phenylephrine (what you show on the box pictures) is different and doesn't really work as well...
(If you went through all of that and would up with Phenylephrine... I'm sorry)

Oh Lordy, what a pleasant time you had at that store . . . . been there done that with clerks that are brand new and haven't been trained well, or they are having a day from h*ll, or some stupido manager thought having this clerk's position do this won't take up much time. And yes, once in a while I haven't take the offending mess back to that particular store because I didn't want to get the clerk fired.

And if someone is serious about making meth at home, they will find the ingridents one way or another.

Wanted to let you know that I have found Mecca in the form of Advil Allergy & Congestion Relief and you don't have to get it from the cashier/pharmacy/whatever. I would, however, sign my life away for it- it's that effective. It's about $1 a pill (not sure how that stacks up to meth) and worth it.