I just realized today that the difference between ‘sleeping’ and ‘speeding’ really isn’t as LARGE as previously thought. IN POINT OF FACT, it is only two (2) letters!

I realized this shortly after I had fired off a “dude, you are, like, ON FIRE today!” comment to one of my team members who has been generating not only emails with questions that kept making me furrow my brow and go, “Hmm, that’s a damn good question, right there…” but also emails that said things like “OK, the stored procedure usp_something_something_something is on DEV. Your review would be appreciated.”

He immediately returned fire with “if I am fast, YOU are a speeding bullet!”

And I began to ponder my day overall, most particularly the actual, MEASUREABLE output of it, and found myself grousing that I was more of a sleeping bullet.

And then I went, ‘Oh. Hey. Never noticed that before.’

With occasional bursts of incoming hurricane.

It began with the annual IEP meeting for Captain Adventure (who is mainstreaming for a large part of his day [with an aid to protect/guide him] into a “regular” third grade classroom, and overall doing very well indeed).

This was followed by the usual fumbling around with forms and things that urgently needed to be done, like, right-now afterward.

During this fumbling around, I had a random blast of actually remembering something and realized that a) I hadn’t remembered to pay the property taxes due in three days (!!) nor the registration for the van due in four days (!!!) plus there was this stupid $25 bill from the doctor that has been sitting on my inbox for, like, two months (!! overdue embarrassment !!) AND THEN there was the registration for the Civic and I had this moment where I thought to myself if this, too, is due in, like, eight minutes, I WILL scream…but then I remembered that Al’s Rendering Unto Caesar isn’t due until February and was all …whew…but then I actually LOOKED at it and the words “SMOG certificate” jumped out at me and then I may have snarled something unladylike, hurled it back into the inbox and turned instead to my work laptop, which seemed like a much safer proposition at that point.

And then I fired off about half a dozen emails in rapid succession.

Then I watched a data load not go very fast.

And then watched a calculation process also not go very fast.

Interspersed with episodes of trying to work on the same paragraph of the design document even though it was becoming QUITE clear that merely THINKING about this document causes EVERYBODY IN THE WORLD to think of something they need to URGENTLY message me about.

And then I became somewhat frozen with indecision over some really minute details.

Then I spent way more time than I probably should have trying to come up with a gentle way to break it to somebody that I couldn’t “just” take “only” a couple hours away from sprint-tasks to join meetings about something completely unrelated to it. It’s like a RULE or something.

And no, next week won’t work either.

And…no, actually…there isn’t a gap, of any sort, between sprints…it’s just “finish on Friday / right back in on Monday.”

And then I spent a few minutes cruising the job boards on my phone, because this is a seriously not-sustainable deal right here.

And then I got to the end of the day with that peculiar blend of feeling exhausted because I hit the ground running and never stopped…but at the same time, when I look back and try to point out what I actually DID, I’m all, like, “…uh…well, there was…I did the…{whining tone} do all the emails about things like field types count?!?!”

NOT IN SCRUM, THEY DON’T. If it ain’t an official product backlog item task, it doesn’t count.

So, officially? I didn’t accomplish a damn thing, all day.

And my SCRUM master is going to be giving me Scowl Face tomorrow.

And I’m going to be all, like, “Wah-huh, not mah fauuuuult! I did stuff! And also other stuff! Plus, it’s like, you know, meh-meh-meh-wah-wah-wah!”

Another completely unrelated thing I realized today is that I currently have a perhaps unhealthy love for bento boxes. They’re just so…efficient. Particularly the “grown up” ones that are basically designed by people who are thinking to themselves, Hmm. What would be able to hold a lunch capable of sustaining a human being for an eight hour work day, but yet fit neatly into a backpack or briefcase…

It’s cunning in the same way that vertical gardening is cunning: You have relatively narrow boxes, that stack. Each little box would be way too little, but put two or three of them on top of each other? Awesome.

All held together with simple little bands or ties, or fancy wraps that require way too much intelligence for someone like me to deal with, so, rubber band, please.

AND THEY CAN BE INSANELY NOT-EXPENSIVE. Like, less than five dollars not-expensive. {swoon!}

They can, of course, also be insanely not not-expensive. Like, $200+ not-not-expensive. And I will look at those hand-carved, hand-painted works of art and think, Wow. That’s just…SO amazing…and then I ponder eating off it and promptly turn back to the versions with sloppily-by-comparison cranes or cats or Pokemon stenciled onto them.

Or nothing at all. Just a set of black or brown boxes with a plain black elastic band to hold them together. Simple, unassuming, and opening up to reveal a startling amount of food.

People with more time and/or talent can get all artsy-fartsy with them and carve little animals out of carrots and some junk. I just pack them with rice and hard-boiled eggs and random bits of leftover meat and stuff like that, then add slices of red bell pepper or parsley fronds or encircle the lunchmeat with Cheez-Its (yes, I really did that once…bento boxes have a way of encouraging such behavior somehow…) and pretend it’s fancy.

WHICH IT IS! Because, true story, ‘bento’ is a Japanese word! Which automatically translates to “exotic and fancy.”

You know, when you’re an American.

We…tend to view all sorts of things other cultures think of as “um, what? You, uh, know that it’s just a {shoelace, boat, head-covering, comfort food, lunchbox}, right?” as being boundlessly fascinating, and/or cunning, and/or fancy, and/or exotic, and/or I have to put my pinkie into the air and assume a REALLY bad imitation of a British accent whenever I refer to this.

Sigh. Over 200 years old, and yet we’re still like a bunch of obnoxious children who have never been let out into public before, suddenly turned loose in the world’s biggest combination candy-and-toy store, running all over the place screaming, “OHMYGAH, CAN I HAVE ONE? PLEEEEEEEEASE?!?!” about darn near everything we see. (But at least we’re enthusiastic?)

Ahem. Anyway. I now have four of them.

One is a chunky, round ‘Thermos’ like one that I love to death even though it is as graceful and elegant as a rather large cylindrical brick because a) it stacks, four things on top of each other, and b) it keeps things hot for a ridiculously long time, so I don’t have to get in line for the microwave at lunch time.

And also I have three ‘little box suitable for carrying in a briefcase’ styles. Which is up from one because I just got two of them I about forgot I’d ordered (one downside of the inexpensive straight-from-Japan sources, sometimes the delivery time should be measured in geologic time or something)  in the mail today.

And I showed them off to my anime-loving daughters and then cackled wildly because ha ha, I leave before you, *I* get first pick of the new beeeeennntoooos, neener-neener…! (<= I know. ‘Mature’ is totally my new middle name)

Yesterday, somebody at work told me that this funky Japanese version of a dollar store not too far from the office carries a bunch of the “super cute” ones with, like, anime characters on them and stuff.

And I was all, oh, REALLY?! (while staring at my Soul Eater mouse pad, eat your heart out, y’all…)

I sense another example of my ‘maturity’ coming on…ha-ha, that’s right, it IS a Ouran High School Host Club bento box, and it’s MINE, all MINE, BWAAAAAAAA-HAHAHAHAHA!!!!

(They can have the Hello Kitty ones. Pffft. Everybody has, like, five of those.)

(Now, if I could get a Black Butler one? I might actually die from The Happy.)

(AL-THOUGH, a Vic Mignogna one would have such major “only somebody who is REALLY several blocks away from normal would even GET that reference” as to be a super-extra-major Crowning Achievement in Nerdiness.)

(Crap. Now I have yet another life’s mission…to the Internet, AWAY…!!!!) 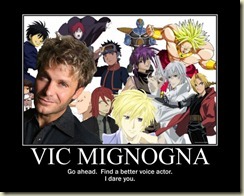 (From Dei-chan-luv at Deviant Art. Source of all kinds of cool, weird, freaky, childish, good, bad and indifferent fun stuff. Deviant Art, I mean. Not Dei-chan-luv. Any fifteen year old who has a Vic Mignogna collage available on demand for weird people she’s probably glad aren’t her mother EVEN THOUGH HE IS NO LONGER HER FAVORITE VOICE ACTOR, is two hundred kinds of pure awesome.)

(I think he’s still mine, though, at least when it comes to English-dubbed animes. Which I’m sure would open up a major flame war if this were an anime site, but, ha ha, it’s not. Plus, I’m way too old to be all, like, “Squeeeeeee! Full Metal Alchemist + Ouran High School Club + Scythe!!!” in the first place. So. There you are. I’m old. I think Vic kicks arse. Your argument [whatever it may be] is invalid.)

Okay, after this post, I am definitely getting you and my daughter together. She thinks Vic is the bee's knees and loves anime/manga/ whatever other stuff to DEATH. Her dream is to someday work for Studio Ghibli (did I spell that right?). You two would have fun together.

I'll be in the other room, watching Doctor Who. :-)