My two favorite things about ACE

One, they have nice, clean tables, perfect for holding your knitting pattern, laptop or what have you...and also they have POWER! (hang on, now I hafta get a picture of that...hi, never mind me, y'all, just your average every day fruitcake taking pictures of the underside of tables...)

Second thing is actually the car behind me - which is a well-policed 'sleeper' car. There are TWO such cars (of six total), where yakking, video games, excessively-loud earbuds, and phones that screech the theme song of Hawaii Five-0 are STRICTLY verbotten. The lights are dimmed, and the ridership culture strong enough that even the crassest, most belligerent of f-bomb dropping teens will find themselves knocking it off, or leaving the car.

Perhaps BODILY. Who did it? Some guy in a hood, and nobody saw it and the staff will strive diligently to find them, but GOSH, they don't appear to have anybody on board that meets Carl's, er, the ejecter's description...(ACE crew: Adore! them...short-nice, firm when they have to be, ultra-cool whenever possible.)

I actually ride them more in the evening, when my psyche is reeling from a day of noise-bombardment only destined to get worse (much, MUCH worse!) when I descend into the swirl of activity that is my beloved Den of Chaos. 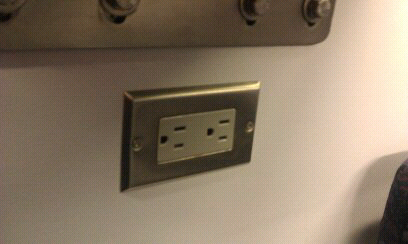 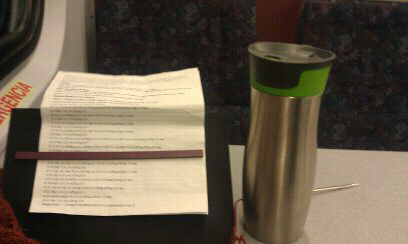 Labels: Commuting, Employment of Self