Once Upon A Time, I would have been GRAVELY disappointed by any Christmas gift that wasn't some form if entertainment. A toy, or a book, or maybe the latest Elfquest graphic novel.

But when torn away wrapping revealed clothes, backpacks, shoes, socks, new hats or sheet sets? I would wrestle onto my face the forced, insincere smile every child who blessed with a Lady Mother who believes - strongly - that Manners and Other Civilized Behaviors should be observed at all times learns to produce, and shove the words "thank you very much, it's lovely!" between my teeth.

Oh sure, OCCASIONALLY a grandmother would hit one out of the park with clothing...like the orange-sherbet colored Gunnysack my dad's mother bought me one year, a color NOBODY ELSE would have picked for me and also, eww, a DRESS, have you MET me?!?! - but I LOVED. IT. MADLY.

It was SWIRLY. (And probably hand-wash, line-dry. The poor Lady My Mother...in my memory [notoriously faulty this far back as it is] I wore that thing as often as I could for months.)

And I remember one Christmas very early in our time together when the husband bought me a vacuum cleaner.

We needed one badly - the hand-me-down first-apartment one had begun to SMOKE, and was so old that the trusty vacuum repair shop, the only place in twenty-five miles with replacement bags and belts, shook their heads sadly and led us to the displays of newer, reconditioned, WORKING ones.

And we had no money. We were broker than broke. We were, in fact, smack in the middle of the days that led to my current faint dislike of Ramen noodles. (I have largely gotten over the ACTIVE DESPISING of them, though.)

I had told the man this was what he "should" get for me. I had practically bought it myself. I gave him NOTHING ELSE for suggestions.

And I liked the vacuum. It saw heavy, best-daily use for ten years before it too began smoking one morning.

And yet...on that Christmas day...I was...disappointed, somehow. I wanted...a toy, or a book, or something GOOD.

I don't know what happened. I don't know whether it should be hailed as a sign of growing maturity or pitied as a symptom of lowered standards...but this is what I got for Christmas this year, and I didn't bother to wrap it, but yanked straight put of the box when it arrived and put it straight into service.

And I consider this to have been a Most Satisfactory Christmas Indeed.

And now, if you'll excuse me...I've got some double-batches of rolls to make... 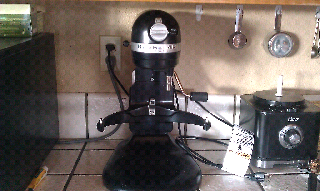 Ooooh. I've been tempted, but my condo kitchen is very small and space is at a premium. Someday though. Clearly the Father of Chaos hit a homerun this year.