So swiftly fades the triumph 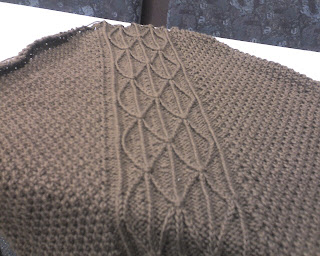 Aglow with triumph, I poured myself a congratulatory gulp of peppermint tea from my thermos.

It always makes me feel EXTREMELY civilized and even vaguely refined to "take tea" while on the train...and if I've actually been able to restrain myself at lunchtime and NOT eat my pastry (or candy, or whatever-all else I grabbed for tea-time), so that I'm sitting there all, "Why yes, my good man, I *am* having tea and scones with freshly made lemon curd - isn't EVERYONE?", I might even work up a slight case of superiority.

Oh, don't worry...the instant I do, I'll either drop the cup of scaldig hot tea in my lap, sneeze with a mouthful of chocolate, or discover I haven't so much as a TISSUE on my person...right after I've gotten caramel on my hands.

Danger of me actually maintaining an "I'm sooooo vastly superior to most people" attitude: Very Low.

But I definitely had it, sitting there in the gently swaying train car, smirking at the FINISHED second sleeve - the hardest part of the sweater, really...the part where the new project smell has worn off, and every irritating habit of the pattern, yarn and needles stands out in violent relief against the sexier, newer Unknown of other patterns flickering across Ravelry...

Second sleeve. Done. Project? Right behind it. Shoot! Might even toss it off this weekend, ha ha!

Congratulations, kid (I told myself), NOW you've got it (literallly) made! A little blocking, a little seaming, and SHAZAM! You're Queen of the Needles, baby!

After a bit more cooing lovingly at the sleeve and shameless self-flattery, I flipped open my binder with a casual, devil-may-care gesture for a quick preview of coming attractions.

That's the collar. The two buttonbands? Another 175 each.

Ah, triumph...so fierce to arrive, so swift to fade...